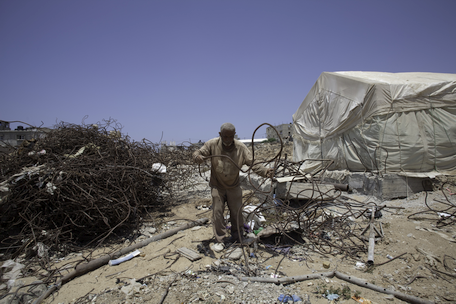 Only 2.5% of the individuals employed in the Gaza Strip (6,803 individuals) work in the construction sector, which, up until two years ago, provided more than 24,000 jobs. Photo Eman Mohammed.

May 25, 2015. A report published by the World Bank indicates that Gaza’s unemployment rate in 2014, 43.9%, was the highest in the world. The report estimates that Gaza’s GDP could have been four times what it is today had it not been for hostilities in the region and access restrictions imposed on the Strip. The report indicates that the closure of the Gaza Strip has led to an estimated 50% drop in its GDP.

According to figures published by the Palestinian Central Bureau of Statistics (PCBS), Gaza’s unemployment rate stood at 41.6% in the first quarter of 2015, and the number of unemployed dropped by just half a percentage point compared to the previous quarter. The average duration of unemployment in Gaza is 18.7 months, compared to 7.7 months in the West Bank.

Unemployment in the 15-29 age category is still particularly high in Gaza, standing at 57.8%. The workforce figure, i.e. all individuals employed or looking for work, is 45.5%, less than half the population within employment age.

Only 2.5% of the individuals employed in the Gaza Strip (6,803 individuals) work in the construction sector, which, up until two years ago, provided more than 24,000 jobs. The sharp drop was caused by the closure of the tunnels running between Gaza and the Sinai Desert, and Israeli-imposed restrictions on the entry of construction materials into Gaza.

Unemployment among women in Gaza stood at 55.2% in the first quarter, and women’s participation in the workforce remains low, at 19.7%.