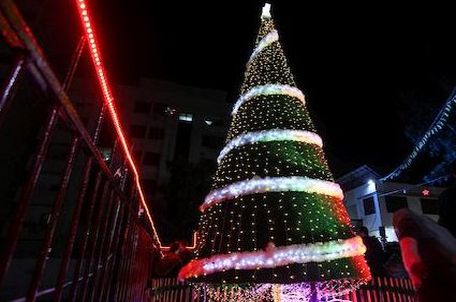 A Christmas tree in Gaza, 2019. Photo by Mahmoud Ajjour/APA

December 11, 2019. About a thousand Christians live in the Gaza Strip today. Twice a year, at Christmas and Easter, the Israeli military unit of the Coordinator of Government Activities in the Territories (COGAT) publishes what it often calls “holiday gestures:” Arbitrary quotas of permits, ostensibly to allow Gaza residents to reunite with family in the West Bank and Israel for the holidays, and to visit the holy sites in Bethlehem, Nazareth, Jerusalem, and other places. Though COGAT regularly takes pride in these measures, touting them as proof of Israel’s respect for religious freedom, its conduct surrounding the publication of the quota, and the unnecessary limitations it imposes on who can obtain a permit in practice, fall far short of Israel’s obligations towards the Strip’s civilian population.

Despite the fact that the holidays’ dates are fixed by nature, and in spite of Gisha’s repeated reminders, COGAT tends to leave the publication of the permit quotas to the very last minute. The time-consuming process of individually screening those who apply for travel cannot begin before the Ministry of Defense “special measures” are made public, and the tendency to publish them at the last minute leaves people little time to appeal if they have been denied permits. Sometimes, the holiday-permit quotas are only published after the holiday has begun, or even ended, leaving people no time to prepare and make plans with their families. Furthermore, the quota is often so small, arbitrary and limited (for example, restricted by age, or by destination), that few are actually issued permits in the end. Israel’s practice of imposing “security blocks” on certain people, barring them from travel altogether, means that it is rare for an entire family from Gaza to be able to travel together during the holidays.

On November 7, Gisha sent a letter to COGAT, cautioning that the announcement of holiday permits for Christmas must be made well in advance. COGAT responded, saying that, “efforts are being made to make sure the announcement is made ahead of time to enable residents to receive the information and submit applications in time.” It is now more than a month later, with only a couple of weeks until Christmas, and the quota has yet to be officially published. On December 4, Gisha sent a letter (Hebrew) to the Defense Ministry demanding that the minister’s decision about holiday measures be announced.

On December 9, Member of Knesset Aida Touma-Suleiman wrote to Deputy Defense Minister Avi Dichter, demanding that the ministry publish the holiday measures without delay. In her letter, Touma-Suleiman also demanded that this year, the ministry refrain from splitting families by granting certain family members permits and denying others, as it has done in previous years.

The rights to freedom of movement, family life, and freedom of religious worship are universal, yet Israel continues to frame the exit permits it gives during the holidays not as a right but as a “gesture of goodwill.” In practice, holiday and prayer permits for Gaza residents are often used as yet another means of exerting pressure on Palestinians living under Israel’s control. The persistent disrespect shown for the needs of the Palestinian civilian population stands in violation of fundamental human rights, and also points to an ongoing intensification of Israel’s “separation policy” between the two parts of the Palestinian territory, Gaza and the West Bank.