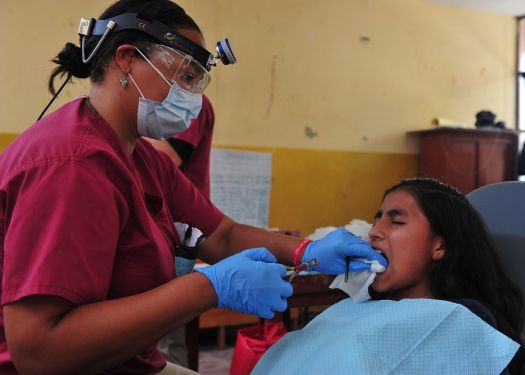 Photo by: Pixabay. The individuals pictured are unrelated to the people or events described

Let’s talk about getting a tooth filling – usually not the most pleasant of experiences. Let’s imagine tooth fillings morphing from a nuisance we try to put off into something we long for, something we have to fight to receive. This is exactly the scenario Gisha was recently tasked with tackling: the legal department contacted the Coordinator of Government Activities in the Territories (COGAT) with a request to allow materials used for tooth fillings to enter Gaza.

In recent weeks, Israeli authorities have seized trucks carrying medical supplies destined for the Strip and refused to let the equipment- worth a total of 140,000 shekels (approximately 39,000 US Dollars) and purchased from Israeli, Palestinian and foreign companies – into Gaza. COGAT officials at Kerem Shalom, the only commercial crossing into the Gaza Strip, refused to allow the shipment in and handed it over, in its entirety, to the Ministry of Defense. Why? Because of tooth fillings.

Included in the large amount of medical (and other) equipment were amalgam capsules, which contain silver and mercury. When centrifuged, these materials form putty that is subsequently molded and solidifies to make silver-colored dental fillings. These are relatively cheap and the only kind of filling most residents of Gaza can afford, compared to the more expensive resin, or- “white” fillings, which also necessitate higher maintenance.

The two companies that ordered the seized equipment have been transporting these materials into Gaza for years and have never previously come across a demand for a special permit. It was only after the company owners inquired as to why the deliveries were being held up that they found out Israel considers amalgam to be a “dual-use” material, which may be used for military as well as civilian purposes and therefore requires a special permit to be brought into Gaza under the conditions of the Israeli-imposed closure.

It’s difficult to see the sense in classifying the miniscule amount of mercury contained in amalgam capsules (less than half a gram per capsule) as a “dual-use” material when its civilian-medical use is so self-explanatory and well-documented. It’s harder still to see the justification for detaining the entire shipment, which contains many other medical items and other goods, based solely on the sudden and peculiar fear of amalgam capsules.

It is, however, easy to see how arbitrarily decisions are made that have immediate, disproportionate and punitive effect not only on the importers, who sustain heavy losses, but also on the two million residents of Gaza whose lives are already routinely and severely disrupted and whose rights are infringed upon. Now, even getting straight-forward dental care has become a challenge. The closure on Gaza has so far failed to achieve every single goal it set out to achieve. It constitutes collective punishment of the entire population, with no justification. It is unclear what reason, other than inertia, still validates it.