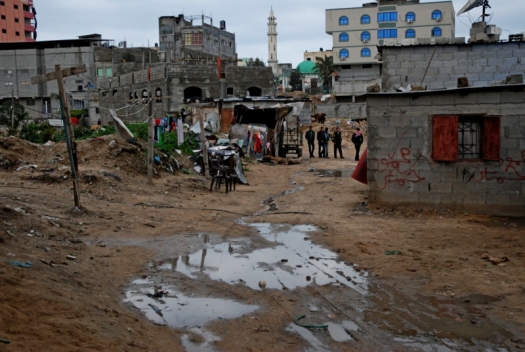 In parallel to the fighting that rages on with devastating force in Gaza and Israel, there is another fierce battle being fought – this one over narrative. Last week, the Israeli foreign ministry released a video and newsletter entitled “The Myth of an Israeli Siege on Gaza”. We provide clarification for some of the main points that appear.

Gisha also shies away from using the term “siege” as to do so would be to insinuate that Israel didn’t already have control, prior to 2007, of most of Gaza’s land crossings, its sea and airspace and restrict travel through them. A “siege” consists of surrounding a certain area in order to compel armed forces within it to surrender. International law permits laying siege to an area, provided that the siege has a specific military purpose and that it ends once this purpose is attained. Moreover, under international law the besieging forces must allow humanitarian aid to enter the area and let civilians leave. Israel has not cited clear goals to subdue the Gaza Strip and does not allow civilians to leave, thus its policy on Gaza cannot be referred to as a “siege”.

The MFA cites transit of goods in to Gaza as evidence that there is no “siege”. The communique is correct in noting that Israel allows Gaza residents to purchase fuel, water and electricity that is transferred by Israeli companies to Gaza. Other goods that are purchased by private sector traders and international organizations are also transferred at Kerem Shalom Crossing. In 2012, Gaza purchased goods from Israel in the amount of 1.3 billion shekels. The key word being that Gaza buys these products – they are not supplied or provided by Israel.

The MFA neglects to mention however what Israel doesn’t allow out of Gaza – namely that it blocks the marketing of Gaza-made and grown products in what were once Gaza’s primary markets – Israel and the West Bank. Before 2007, 85% of Gaza’s outgoing goods were sold in Israel and the West Bank. Israel’s ongoing ban on Gaza’s access to these markets explains why the rate of export stands at just 2% of pre-2007 rates.

Israel notes that it restricts just a “short list” of “dual use” items but the list contains the basic building blocks of construction: cement, steel and gravel. Yes, these items have been used to build tunnels. They are also the foundation for building schools, hospitals, homes, and critical civilian infrastructure. Preventing their entry to the Gaza Strip following such extensive damage caused by bombardments in this and previous military operations is tantamount to withholding basic humanitarian necessities such as fuel, electricity and water. Creative and immediate solutions must be found to allow entry of construction materials but not allowing them in or allowing them in small quantities is unacceptable.

Gaza does indeed have some malls and restaurants, as do most places in the world. The presence of a mall in a country or territory certainly does not say a lot about whether conditions of poverty and injustice are also present. Restrictions on movement to and from Gaza – on exit of goods, on movement of people and on entrance of construction materials – have lowered purchasing power in the Strip. Extensive damage to at least 360 factories and workshops in Gaza in this military operation promise to lead to increased unemployment and even lower purchasing power. On the eve of the hostilities, the unemployment rate stood at 45% and more than 63% among young people. The closure perpetuates dependency on outside aid and prevents the emergence of an independent economy.

On movement of people, the criteria for travel indicate that restrictions exceed what is needed for security. For example, parents who receive exit permits can bring along children under the age of six, but not seven or eight year olds. A woman can request a permit to visit her sick mother in the West Bank but would not be able to request a permit to visit an ailing aunt or grandmother. A Palestinian employee of an international organization may be eligible to request a permit, but not one from a Palestinian organization providing critical services to the population. These and other restrictions indicate a desire to reduce movement, not just protect security. During the first half of the year, 6,000 exits of Palestinians were recorded at Erez on average per month compared to over 500,000 per month in 2000 – or about 1%.

The MFA newsletter also claims that in the first five months of 2014, Israel allowed 60,000 people from Gaza to cross into Israel, including a large number of businesspeople. This is misleading. Based on the army’s own figures, this is actually closer to the number of crossings in both directions during this period, not the “number of people” or just crossings into Israel. One should also bear in mind that businesspeople, like foreign staff of international organizations and foreign journalists, sometimes cross Erez multiple times per week or month.

In truth, Israel sells just 5 million cubic meters of water to Gaza annually. There is infrastructure in place for the transfer of twice this amount, yet for various political reasons, it appears the decision to turn the tap on has yet to be made. Regarding electricity, again, Gaza purchases electricity from the Israeli Electric Corporation. Even when all the lines damaged over the course of the hostilities are repaired, this supply would still only account for less than a third, not a half, of demand in Gaza. The sole power plant in Gaza, which provided the only local source of electricity, albeit in small amounts, was recently bombed by Israel.

There is no doubt that Israel has legitimate security concerns and the authority to decide by which routes and procedures goods and civilians transit to and from Gaza. That same authority – derived from Israel’s ongoing control of Gaza and Gaza’s dependence on Israel – remains subject to an obligation to facilitate as normal a life as possible for the people of Gaza. Instead of fulfilling that obligation, Israel has established a civilian closure over Gaza severely limiting movement of people and goods through restrictions that either serve no security purpose or cause hardships that are clearly excessive in relation to the marginal security benefits they might yield.

Hamas’s human rights violations, abuses of power and misuse of resources are no excuse for Israel to shun its obligations. More can be done to protect the security and rights of Israelis and Palestinians. Israel’s using access restrictions as a bargaining chip for this and previous ceasefire negotiations should be an indication that not all Israel’s policies stem from concrete security needs and that restrictions can be reversed not as a concession to Hamas but as a proactive step towards generating stability and respect for rights.