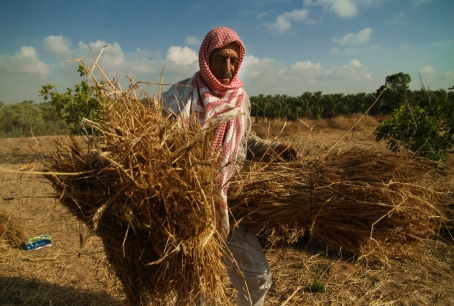 December 29, 2015. The IDF Spokesperson confirmed two days ago to +972 and Local Call that the military had sprayed herbicides inside the Gaza Strip for the purpose of destroying agricultural crops in the area. The military’s response read: “The aerial spraying of herbicides and germination inhibitors was conducted in the area along the border fence last week in order to enable optimal and continuous security operations”.

Gaza farmers report that while the military claims the spraying has taken place over the area it defines as the “buffer zone”, a hundred meters from the border fence, the effects of the toxic chemicals often reach far distant areas, both due to winds and the amount of chemicals used. According to the farmers, the effects are often felt up to 500 meters from the fence, harming hundreds of dunams of agricultural crops. Palestinian news agency Ma’an reported that the last spraying harmed 263 dunams of spinach, parsley, peas and wheat.

The spraying causes irreparable damage to the crops and forces farmers to destroy them. Local farmers say the effects are noticed only three days after the spraying, and that the military has been spraying inside the Gaza Strip for about three years, without warning or coordination.

Israel bans Palestinians from entering the so-called buffer zone that runs along the border fence between Israel and the Gaza Strip. Officially, the buffer zone stretches 300 into Gaza from the border fence, but the army claims it allows Palestinian farmers to approach up to a 100 meters from the border. In recent years, dozens of Palestinians who have approached up to various distances from the fence have been shot. The military has never explained how the no-go zone is marked, and how entry of farmers is coordinated. The military often comes in with heavy equipment and razes the area close to the border.

As far as spraying goes, it is worth noting a 2007 High Court decision in a petition against the Israel Land Authority, which had ordered spraying fields cultivated by Bedouins in the Negev desert, claiming they did not own the land. The court ruled that since spraying posed a risk to the health and life of animals in the area, spraying should not be pursued. In the judgment, Justice Salim Joubran wrote that aerial spraying was unlawful and contradicted the Vegetation Protection Law which is designed to “protect human and environmental health”. Justice Edna Arbel wrote “Suffice it that exposure to the herbicide may cause eye and skin irritation, respiratory distress or nausea and dizziness to rule that spraying at the very least might harm human health”.

The very idea that the Israeli military is spraying toxic chemicals over agricultural crops for security reasons is sickening. It also raises a slew of questions, which we intend to pose to the authorities.