Women’s unemployment in Gaza was 74.5 percent in 2018, an increase of more than five percent since the last quarter of 2017. The percentage of women in Gaza participating in the workforce in 2018 stood at 25.5.

In the last quarter of 2018, the unemployment rate in Gaza declined somewhat as a result of a slight increase in temporary jobs available in the service sector, generated through international funding designed to provide work for young university graduates. Sadly, these jobs are short-term positions and are expected to disappear once funding runs out.

Notably, even the few who find employment in Gaza don’t necessarily earn enough to make a living. The average daily wage in Gaza during 2018 was only 34.5 ILS (approx. 9.5 USD) per day. In the private sector, the average daily wage was 33.8 ILS (approx. 9.3 USD). Seventy-two percent of private sector employees in Gaza earn less than minimum wage (1,450 ILS per month).

The increasing unemployment rate in the past year is a reflection of worsening living conditions in the Strip. This should serve as a wake-up call for a shift in policy. There are measures that Israel should take in order to immediately alleviate the situation, such as allowing greater freedom of movement for the private sector in Gaza, including people engaged in small-scale trade, which would help to revive the Strip’s productive sectors. The sweeping ban on exit of Gaza residents for work in Israel and the West Bank should be removed. Restrictions on marketing Gaza goods in the West Bank and Israel should be lifted and permission to sell goods in Israel should be expanded. Regardless, Israel must refrain from imposing measures of collective punishment against the civilian population in the Strip, many of which go to thwart economic development. 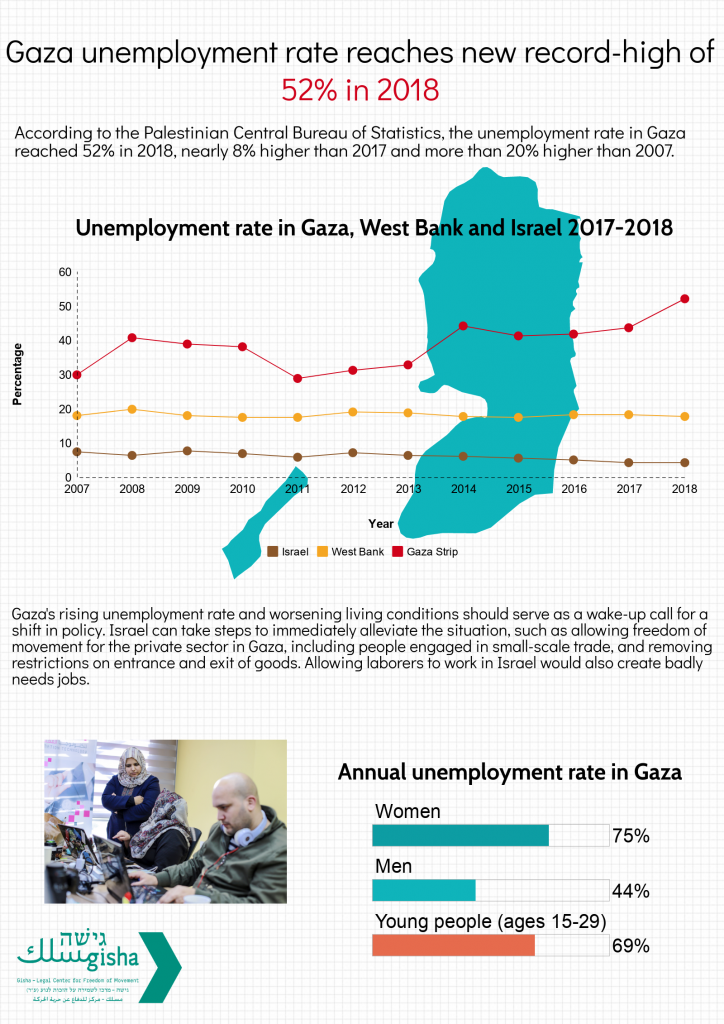