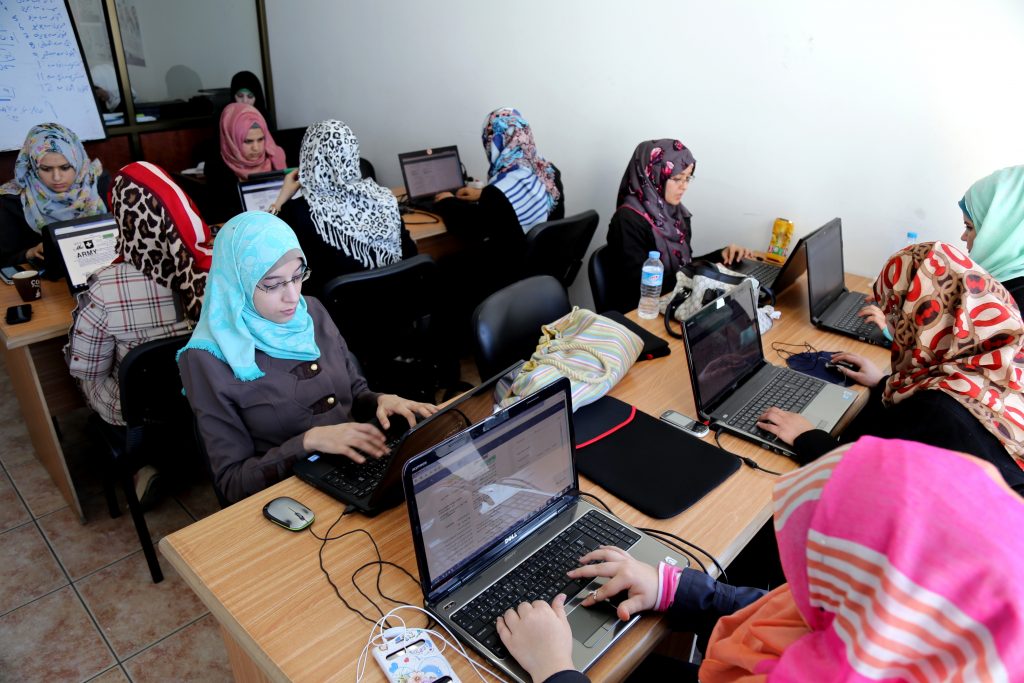 A high-tech company in Gaza. Photo by Asmaa Elkhaldi

June 10, 2020. The Palestinian Central Bureau of Statistics (PCBS) released its quarterly unemployment report for the first quarter of 2020. Given it covers January through March 2020, the report does not reflect the full scale of economic deterioration caused by measures taken to curb the spread of COVID-19 since mid-March. However, the figures do provide an indication of the acute economic crisis Gaza faced even before the pandemic, which has only further undermined the living conditions of Gaza’s population and rendered thousands more jobless.

The high unemployment rate in Gaza does not even reflect the full extent of the poverty rampant in the Strip. Public sector employees in Gaza, that is, people employed by the Palestinian Authority or by the local government, account for 35.8% of all employed workers in the Strip. They have received reduced salaries for months, if not years in some cases. In the first quarter of 2020, public sectors employees earned about 95 ILS per day on average (less than 28 USD a day). The average daily wage for employees in Gaza’s private sector was only 32.7 ILS (less than 10 USD per day). Some 80% of private sector workers earn less than minimum wage, which in Gaza is a mere 1,450 ILS per month (about 420 USD). In the first quarter of 2020, the overall average daily wage in Gaza was only 60 ILS (about 17.5 USD per day).

Gaza’s farming and fishing sector recorded a drop of 29% in the number of jobs, from about 19,000 in the fourth quarter of 2019 to about 13,400 in the first three months of this year. The construction sector, which is immediately impacted by access to necessary materials entering through the Israeli-controlled Kerem Shalom Crossing, provided about 7,600 jobs this quarter, only a slight decrease compared to the previous quarter, when some 7,800 people were employed in the sector. However, the number of construction jobs in Gaza is still far smaller than it was in the second quarter of 2013, which is the last period of time when large volumes of construction materials entered the Strip through the tunnels between Gaza and Egypt and the sector employed more than 24,000 people. According to the Palestinian Contractors Union in Gaza, the sector currently employs fewer than 2,700 people due to the economic crisis brought on by the pandemic.

As noted, in the months since the period of time covered in the latest PCBS report, amid the threat of COVID-19, thousands of people joined the ranks of Gaza’s unemployed, mainly people who had worked in the hotel, tourism and restaurant industry, which was shut down almost entirely, as well as workers in factories that were temporarily closed, and the almost 6,000 people who had valid “trader permits,” most of whom worked in Israel before Erez Crossing was closed for travel on March 8.