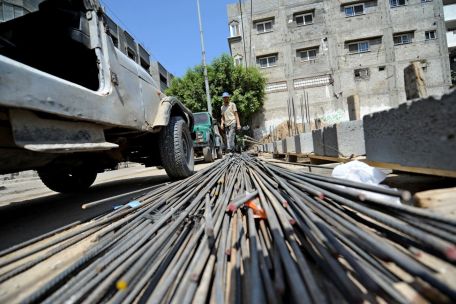 May 25, 2014. Seven months after the Ministry of Defense imposed new restrictions on the sale of construction materials to the Gaza Strip – adding to the near total halt in tunnel activity by the Egyptian military last summer – Gaza’s unemployment rate spikes to 40.8%. According to figures published by the Palestinian Central Bureau of Statistics, Gaza’s unemployment rate during the first quarter of 2014 rose 6% from the previous quarter’s 38.5%, and 30% from the corresponding quarter in 2013 (when the unemployment rate was 31%).

This is the highest unemployment rate in the Gaza Strip since late 2009. About 20,600 people joined the ranks of the unemployed in Gaza, bringing the number of unemployed to 180,200, compared to 159,600 in the last quarter of 2013. By contrast, unemployment in the West Bank has not changed, remaining at 18.2%.

During the first quarter of 2014, 17,000 women joined the workforce, but at the same time 8,000 joined the ranks of the unemployed. In other words, more women entered the job market, could find work and thus were counted among the unemployed.

The construction industry, which has suffered a blow due to the near total closure of the Gaza-Egypt tunnels and Israel’s decision to impose severe restrictions on the sale of construction materials to Gaza, saw the sharpest decline in jobs. It’s been seven months since Israel imposed a blanket ban on the sale of construction materials to the private sector in Gaza and restricted the entrance of cement, steel and gravel to international aid organizations working in Gaza after the discovery of a tunnel near Kibbutz Ein Hashlosha on October 13, 2013. Most construction workers in Gaza were employed in the private sector.

According to the Palestinian Central Bureau of Statistics, in mid-2013, prior to the closure of the tunnels to Egypt, 24,200 individuals worked in the construction sector. Today, it employs only 6,800 people. Between the second half of last year and the end of the first quarter of 2014, about 17,400 individuals who had made their living in the construction sector lost their jobs.