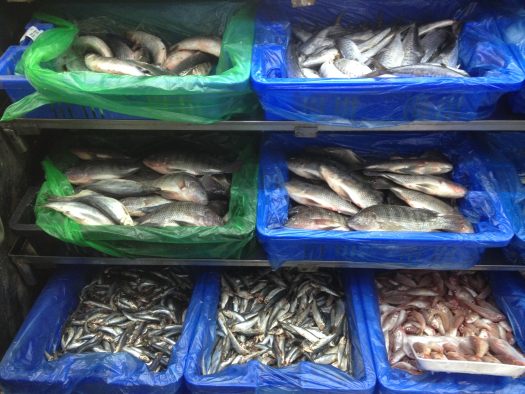 Last Saturday was a holiday in Ramallah: 26 years since the Palestinians declared independence. Independence has yet to arrive, but in a fish shop in central Ramallah, there was a modest sign of progress toward reconnecting the two parts of the Palestinian territory. For the first time in seven years, fish from Gaza was sold in the West Bank.

Two customers who entered the shop were very pleased to hear of the fish’s origins. They both lived in Gaza in the past, and both had relied on Gisha’s legal aid to obtain Israeli recognition of their residence in the West Bank.

The woman bought sardines for 25 NIS ($6.50) per kilogram, while the man bought salfuh (guitarfish) for 35 NIS ($10) per kilogram. The shopkeeper, who must have guessed where his customers were from the questions they asked, gave them a discount.

“Will you be bringing fish from Gaza every week?” the woman asked.
“Mondays, Wednesdays and Fridays”, said the shopkeeper.

That is no small thing.

Ever since 2007, as part of the separation policy, Israel has prohibited the sale of goods originating from Gaza in Israel and the West Bank, where 85% of the goods shipped out of Gaza were sold until then. The ban almost completely paralyzed Gaza’s export, and with it Gaza’s economy, which saw a rise in unemployment and a weakening of the private sector. After the hostilities in Gaza this summer ended, Israel pledged to ease access restrictions imposed on Gaza, including a pledge to allow the sale of agricultural goods from Gaza to the West Bank.

It’s not yet clear how economically viable this type of marketing is, given costly logistical requirements that Israel has imposed and the frequent closure of the Kerem Shalom crossing. Furthermore, non-agricultural products are still not permitted for sale in the West Bank, nor can anything be sold in Israel, which was once Gaza’s largest market. But on this Saturday, two people living in Ramallah bought, prepared and ate fish that reminded them of their childhood by the sea – a mere 90 kilometers from Ramallah, and yet so so far away.