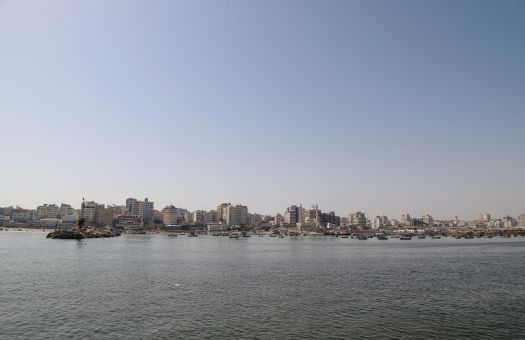 view of Gaza from the sea, 2019. Photo by Asmaa Elkhaldi

Around this time 14 years ago, Israel completed the removal of its military bases and Jewish settlements from the Gaza Strip. Many believe that with the implementation of the ‘disengagement plan’, Israel unburdened itself of Gaza and no longer bears responsibility for what happens there. The reality, however, is that Israel still controls many aspects of life in Gaza, and consequently the lives of Gaza’s residents.

Israel prevents access to Gaza’s sea and air space and controls all but one of its land border crossings, Rafah. Israel takes it upon itself to screen and sort all goods that are shipped into Gaza and demands to know the purpose of the goods, who receives them, and who pays for them. Israel decides what goods produced in Gaza can be sold outside the Strip, how much, when, and where. Israel also decides how much electricity will be sold and supplied to the Strip, reducing its supply at will.

In the first half of 2019, a monthly average of approximately 12,000 exits was recorded at Erez Crossing, the only pedestrian crossing between the Gaza Strip and Israel, less than 3% of the monthly average before the Second Intifada.  Approval rates for permit applications have plummeted: In the first half of 2019, an average of 318 truckloads of goods exited Gaza each month, less than a third of the monthly average before the closure was imposed in 2007. Israel prevents many different types of products from exiting the Strip for sale in other markets, including processed foods.

The decisions Israel makes have a significant impact on the lives of Gaza’s residents – sometimes in matters of life and death – but also on their ability to maintain family ties, operate businesses, pursue professional opportunities, access healthcare, engage in cultural and leisure activities, and seek personal fulfillment.

In the wake of Israel’s ‘disengagement’ from the Strip, Gaza’s residents have no clear legal status vis-à-vis Israel; they depend on Israel for nearly every aspect of their lives, but do not have any corresponding rights.

In 2007, after Hamas took control of the Strip, Israel tightened restrictions on movement for Gaza’s residents. Security officials have said that the purpose of the closure is to put pressure on Hamas, but in practice, the policy harms civilians. Some of the restrictions have been lifted or changed over the years, however, the principle remains the same, despite the fact that the restrictions have clearly failed to achieve their original goal of toppling Hamas or preventing rocket fire on Israeli communities.

While Israel does face security challenges, it cannot address them by permanently denying the human rights of Gaza’s two million residents, who are subject to Israeli control over many aspects of their lives. Fourteen years after Israel formally withdrew from Gaza, the reality today is not disengagement – it is remote (but not too remote) control.