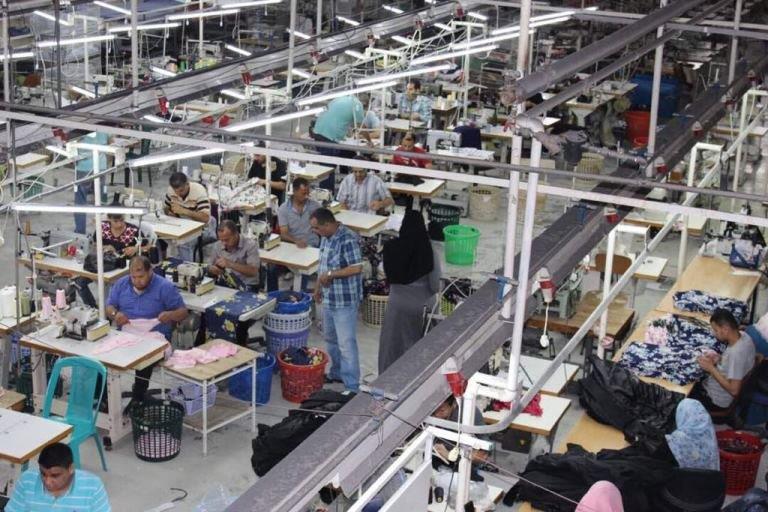 The Unipal 2000 textile factory in Gaza in 2017. Photo by Mohammed Azaiza

April 27, 2020. Adapting to the times, several textile factories in Gaza have reacted to shifting demand and converted their production lines to manufacture of personal protective equipment (PPE). According to the deputy director of the Union of Palestinian Textile Industries in the Strip, Dr. Fouad Odeh, since the outbreak of the coronavirus in the region, Gaza companies have produced about 10,000 protective suits and five million masks, selling them in the West Bank and Israel. The vast majority of these items, about 90 percent, are sold to Israeli companies who then sell them in Israel or export them abroad. Odeh estimates that about ten large factories in Gaza are currently manufacturing protective equipment in cooperation with other, smaller factories. He adds that despite these efforts, many textile company owners worry about the recent increase in imports of medical masks from China, which has already lowered demand for their products.

In early April, the Union of Palestinian Textile Industries convened to discuss the impact of measures taken to curb the spread of coronavirus in Gaza on their sector, which normally employs about 6,000 people. Amid the current global economic crisis, demand for textile products on the local market, as well as in the West Bank and Israel, has dropped sharply. With travel via Erez Crossing heavily restricted due to measures taken to curb the pandemic, manufacturers and suppliers are less able to collect on existing debts. The deepening crisis is also impacting secondary industries that rely on the textile industry, such as laundering services, sewing workshops, and clothing and accessory shops in the Strip.

Figures released by the union reflect the harm caused over the years of closure to this sector with long roots in Gaza and still considered a central pillar of Gaza’s economy. In 2000, the sector provided jobs for approximately 36,000 people in about 900 factories and companies. After Israel tightened the closure on Gaza in the summer of 2007, completely blocking sales of textile products outside the Strip, the number of factories plummeted to 100, and the number of jobs fell to 2,500.

The sector began recuperating after Israel lifted the blanket ban on exit of textile it had enforced for eight years in 2015. That year, nine textile factories were granted permission to their products outside Gaza, with the number rising to 75 factories by 2019. The number of truckloads of textile goods for sale outside Gaza rose from 20 in 2015 to 230 in 2019. Over this four-year period, the income from marketing textile goods outside the Strip quadrupled. Still, restrictions Israel continues to enforce on travel for business purposes, including the rampant imposition of “security blocks” barring people from travel, continue to hamper Gaza’s textile trade. Ongoing restrictions enforced by Israel on access to equipment and raw materials needed to develop the industry, increase production and maintain quality continue to block the sector from fulfilling its potential. The number of jobs in Gaza’s textile sector in 2019 is still only 16 percent of what it was before the closure was imposed.

In early March, Unipal 2000, a Gaza-based clothing manufacturer stopped their normal production lines, making mostly women’s clothing, and switched to manufacture of masks and protective garments according to international standards. The items produced by the factory are mostly marketed in Gaza, Israel and the West Bank. Nabil Al Bawab, one of the company’s owners, says that the raw materials for the items are purchased from Israeli companies, and customers can choose from a variety of designs. So far, the company has sold about 20,000 masks to Israeli distributers. According to Al Bawab, he has had to cut 200 jobs at his factory due to social distancing measures. He hopes that he will be able to continue to access raw materials and fabrics required to sustain the current boom in production.

Sami Abu Jahel & Co., a veteran textile company with 200 employees, normally manufactures women’s clothing. “We switched to making masks because of the global shortage and spike in demand,” says Abu Jahel, the owner. We’ve already manufactured about 100,000 masks for sale in Israel, and 10,000 more for sale in the Strip.” Like other textile companies, Abu Jahel is also concerned by the sharp drop in demand for clothing and the difficulty collecting on outstanding payments, now that he is unable to meet with his distributors in Israel.