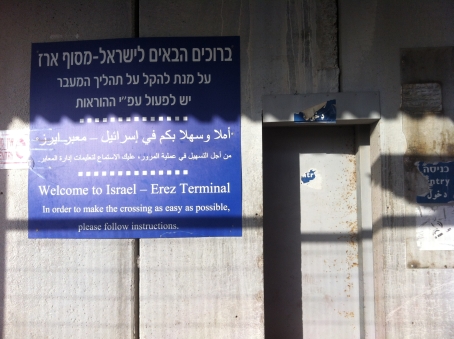 Israel will only consider travel applications submitted to it by the Palestinian Civil Affairs Committee in Gaza on behalf of Gaza residents. Erez crossing. Photo: Nuriya Oswald

November 5, 2015. This week, Gisha received an e-mail from a Palestinian student from the Gaza Strip who has a scholarship to study in Japan. The student wrote that he had signed up to travel through Rafah, but the crossing had not opened for exit since August. In September, he filed a permit request to the Israeli authorities to travel via Erez Crossing, but never received an answer. While he was waiting, he managed to obtain a non-objection visa to Jordan. His visa to Japan expired yesterday before we were able to help him get to his studies in time. He’s far from being the only student trapped in Gaza.

So what’s the story? Each year, hundreds of students from Gaza travel abroad for study, seeking better opportunities or because their field of study isn’t offered in one of Gaza’s universities and travel to the West Bank for study is prohibited outright. Israel will only consider travel applications submitted to it by the Palestinian Civil Affairs Committee in Gaza on behalf of Gaza residents. There have been many accounts pointing to inefficiencies, whether deliberate or not, in the bureaucratic mechanisms established through the Oslo Accords and implemented by Israeli and Palestinian officials in charge of processing permit applications, particularly those made by students recently.

Israel’s criteria for travel of people via Erez allows for graduate students with scholarships to study abroad to apply for permits for transit via Israel and the West Bank to Jordan. Undergraduate students are not eligible to receive permits according to the criteria, however, in practice, since late 2014, Israel has been willing to review lists prepared by the Palestinian Civil Affairs Committee of students seeking to travel for undergraduate studies abroad.

Several lists have been sent since October 2014, sometimes so late, however, that by the time a permit was granted, if it was granted, by then students’ visas had expired or their studies were already underway. In many cases, students’ requests were rejected or there was no answer at all. The lists contained the names of hundreds of students, but so far, only 229 exited through Israel via this de facto mechanism, in several groups. Graduate students in some cases transited on their own, outside of the mechanism. Hundreds of students are still waiting, hoping for an answer before their visas expire and their universities lose patience and cancel their enrollment.

Students in general are among the hardest hit by the ongoing closure of Rafah Crossing for travel into and via Egypt. Students who were once able to travel to universities abroad via Cairo, must now ask Israel’s permission to travel to Jordan and from there on to their destinations (they are not allowed to fly from Ben Gurion Airport in Israel).

Accounts by students also indicate that the Jordanian authorities don’t issue transit visas in time and that some applications for transit visas are rejected without explanation.

It’s clear many actors are failing these young people, but Israel controls the main crossing point from Gaza, bears primary responsibility for allowing passage, and has recognized that Gaza, and its young people in particular, need a horizon.

The last time students travelled out of Gaza was on September 9. Only 65 students travelled then. The Palestinian Civil Affairs Committee had submitted a list of 87 names to the Gaza DCO, of which 78 were approved. However, because it took so long to get the permits, some of the students lost their scholarships or their visas had already expired.

This morning we received preliminary information indicating that around 99 students were approved for permits for this coming Sunday, following a list of more than 300 names that was sent two weeks ago. Hopefully some of them will still have valid travel documents and spaces saved at their universities abroad.