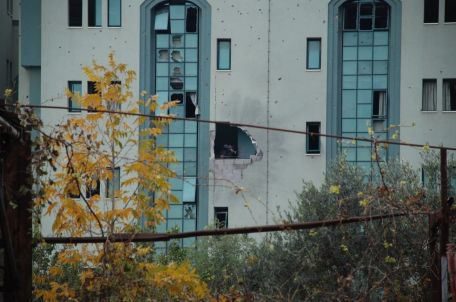 A residential building in Gaza after Operation Cast Lead. Photo by Karl Schembri

May 5, 2019. Gisha watches with grave concern as hostilities between Israel and Gaza escalate dramatically. Deliberate or indiscriminate fire on civilians is a war crime. It must stop, immediately, as must all actions which knowingly put civilians at risk.

This morning, Israel closed Gaza’s crossings to movement of people and goods: Erez Crossing is closed other than for transfer of a handful of medical patients in critical condition. Kerem Shalom Crossing is closed other than for entrance of fuel for Gaza’s sole power plant. Access to Gaza’s territorial waters has been blocked completely since yesterday. Rafah is operational. The crossings cannot be used as instrument of war to pressure the civilian population in the Strip. Even in the current security climate, at a very minimum, humanitarian access must be allowed.

There is no military solution that can usher in long-term quiet. Regional stability will only be made possible once Israel makes substantial, forthright steps to protect the human rights of Gaza’s two million residents and allow the Strip’s shattered economy to recover and develop. Ceasefire agreements and “gestures” by Israel to “ease” the closure on Gaza cannot substitute long-term solutions, including an end to the occupation.