When the May 2021 military assault on Gaza began, Israel blocked entry of most goods to the Strip, including raw materials, spare parts, and many other items essential for the functioning of Gaza’s water and sanitation infrastructure. After the assault, movement of goods mostly resumed but these items remained blocked. In August 2021, Israel began allowing some items that had been stuck in storage for months to enter Gaza, and resumed accepting requests for coordinating entry of equipment needed to repair the severe damage sustained by civilian infrastructure during the attack. However, thousands of items remain delayed and Israel continues to stall applications for the entry of equipment required for routine maintenance of Gaza’s water and sewage systems.

According to information received by Gisha and other reports, Gaza’s roughly 500 civilian infrastructure facilities are facing a shortage of thousands of spare parts and other items, including valves, filters, pumps, pipes, electro-mechanical equipment, electric cables, replacement parts for service vehicles and parts for computers and computerized systems used for inspection, oversight, data collection and operation. The same malfunctions keep recurring in desalination plants and sewage treatment facilities because, in the absence of necessary parts, they are repaired using makeshift materials.

Gaza utility workers have not been able to fully repair much of the damage caused to water and sanitation systems during the May 2021 attack. Shockwave damage to internal components in pipes, water reservoirs, wells, pumping stations and other facilities continues to surface.

The situation has alarming crosscutting implications for life in the Gaza Strip already reeling after the attack. Water leakage from pipes is worse than normal, and rainwater cannot be properly drained, leading to an increased risk of flooding. The quantity and quality of drinking water supplied to residents are at risk of deterioration, while sewage flows into the sea following only partial treatment, posing environmental and health risks, particularly for Gaza residents. The situation is obviously unsustainable. 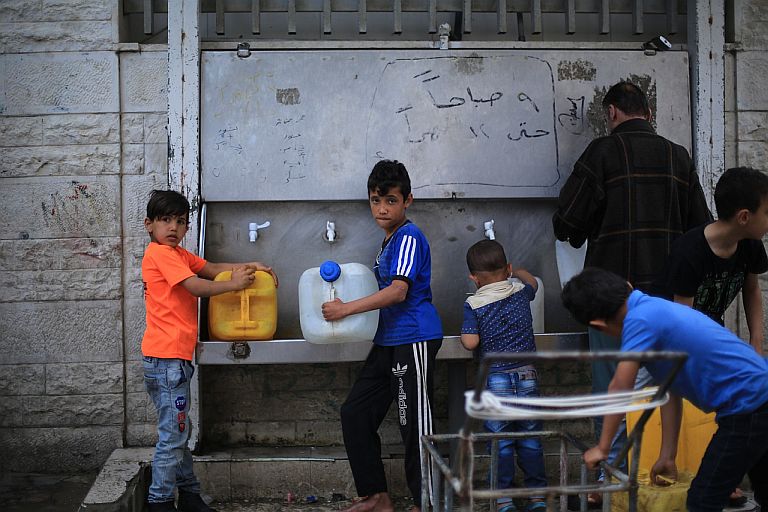 A communal water tap in Gaza. Photo by Amjad Elfayomi

The thousands of parts and materials blocked from entering the Gaza Strip over the past ten months are items Israel considers “dual-use,” meaning items used primarily for civilian purposes, which may, according to Israel, be used militarily as well. Even before May 2021, restrictions imposed by Israel on access to items it defines as “dual-use” put Gaza’s water and sewage systems in a precarious state, impeding their development and maintenance.

Interviewed for the Haaretz investigative report, Deputy Director of the Gaza Coastal Municipalities Water Authority (CMWU) Maher Najjar explained that prior to the May hostilities, suppliers and contractors waited anywhere between a week and a month for an Israeli permit to bring in items urgently needed for routine maintenance or repairs. Now, Najjar told Haaretz, waiting times are between two and five months, sometimes more. Some requests have received no response at all, including some that were submitted prior to May. These parts are needed for the computer systems used to run desalination and sewage treatment facilities, water reservoirs, certain wells and the CMWU main office server.

Another CMWU representative told Gisha that multiple requests submitted by the Palestinian Water Authority (PWA) more than three months ago to coordinate entry of materials into the Strip were never answered. She says that Israeli authorities demanded that the PWA’s requests be resubmitted through a new online system called “Yuval” but even since the CMWU refiled them, no answers have been received.

In addition to the inexplicable delays, the proper operation of water and sewage systems has also been affected by a ban Israel imposed in June 2020 on the entry of steel pipes larger than 1.5 inches in diameter, which are vital for high-pressure water flows. 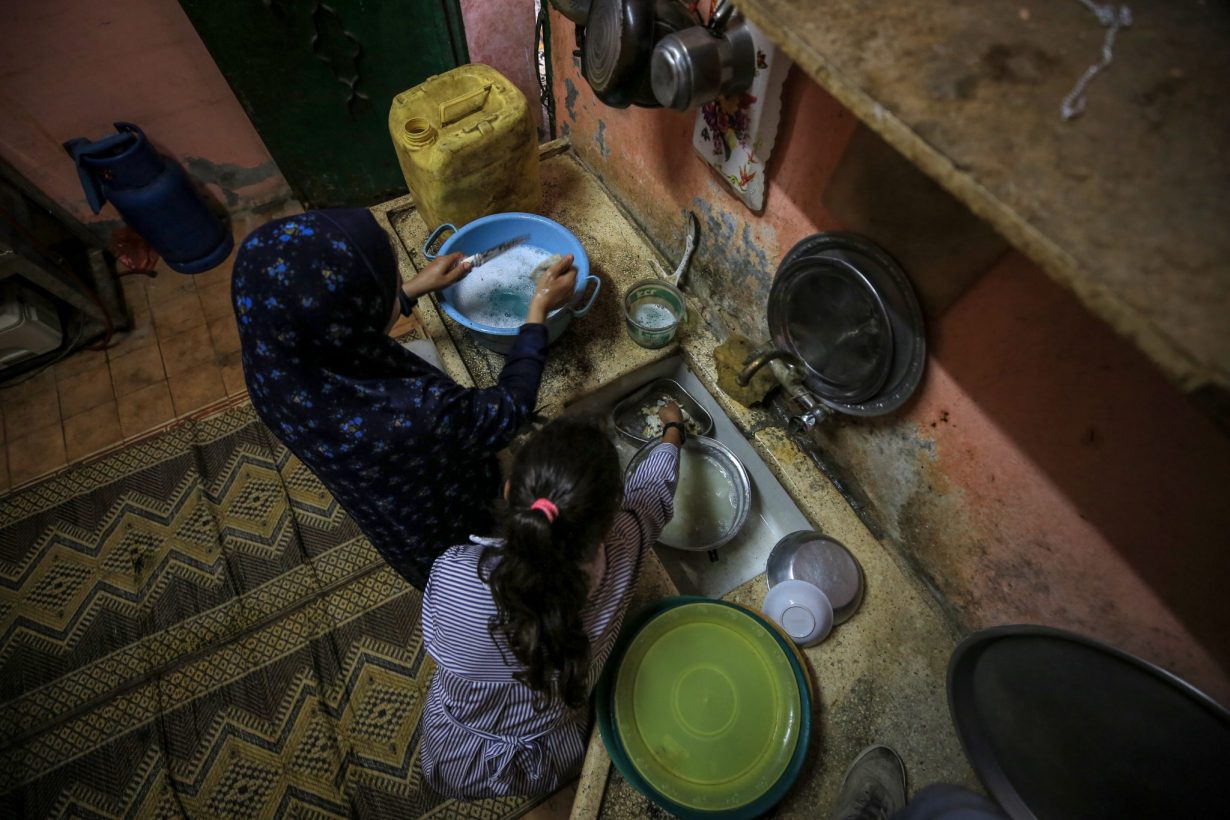 Water is available in homes every two or three days. Photo by Amjad Elfayomi

Domestic water consumption in Gaza today is about 82 liters per capita per day, which still falls short of the minimum recommended by the World Health Organization (100 liters per day per capita). Chronic shortages of raw materials and spare parts perpetuate disrepair of systems and supply lines, which in turn impacts the amount of water available to residents (for details see section on Gaza’s water sources, below). Only 20% of the water flowing out of taps in the Gaza Strip is potable, and only a quarter of households have access to water fit for human use. Limited capacity operations at desalination plants and aquifer water purification facilities may put the quantity and, most importantly, the quality of drinking water in Gaza, at risk.

The implications of Israel’s actions are grave. The total collapse of a major desalination plant and sewage treatment station in Gaza was averted only thanks to urgent intervention from international officials who pressured Israel to allow entry of parts. In another case, about 100 replacement parts for electro-mechanical equipment and valves in a new sewage treatment facility in Al Bureij, serving 800,000 people, were cleared following the manager’s warning that without the parts the facility would shut down, as well as pressure from German officials, after the country invested 100,000,000 USD in the facility’s construction. The equipment shortages nearly halved the facility’s output (35,000 cubic meters of sewage per day instead of 60,000), which increased the flow of partially treated wastewater into the sea. Obviously, this kind of intervention cannot be exerted for each of the thousands of items required for system maintenance.

According to a long list of pending requests provided by the CMWU, the ongoing shortage in equipment has hindered maintenance needed to reduce the risk of flooding in a project funded by an international organization that impacts roughly 50,000 residents. An application by the PWA for a diesel-driven mobile pump and other items submitted as part of the project has been waiting for a response from Israel for more than 150 days. The response to another application made by the PWA, for an electrical submersible pump motor for the Wadi Gaza water well with funding from yet another international organization, has been delayed for more than 365 days, barring 5,000 residents from accessing water. Israel has also refused to allow spare parts for seawater pumping, needed for the Deir Al Balah desalination plant. If existing pumps malfunction, the plant’s output would be curtailed, impacting the water supply to 100,000 residents. Applications made by contractors working on behalf of two aid agencies more than 60 days ago for coordination to bring in solar panels, cables and solar energy converters, critical for sewage treatment facilities servicing as many as 400,000 people have not been answered.

The long delays and uncertainty surrounding application processing also have financial repercussions. Najjar says the cumulative cost of storing imported goods not cleared for entry has already driven bids submitted by contractors for CMWU projects up by 30 percent. Contractors and CMWU employees waste precious time on endless inquiries with the Israeli authorities about the status of requests.

After the May attack on Gaza, Israeli Defense Minister Gantz said the country had to “permit the basic humanitarian response,” while, at the same time, clarifying Israel was making reconstruction contingent on return of the two Israeli civilians and two soldiers’ bodies allegedly held by Hamas. Last September, Minister of Foreign Affairs Yair Lapid presented a two-stage rehabilitation plan, which would initially focus on “humanitarian rehabilitation,” tackling “basic human needs,” including repairs to the electricity grid and construction of a desalination plant – in exchange for a Hamas commitment to long-term quiet. In practice, due to Israeli foot-dragging around the entry of equipment essential for the proper functioning of infrastructure since May 2021, not only is Israel already denying Gaza residents their most basic humanitarian needs, but in fact, it is leveraging them as bargaining chips for political gain, at the expense of human rights and lives.

The situation is flagrantly unacceptable: Access to water and sanitation services is a basic human need, fundamental right and patently humanitarian imperative. Israel’s control over the crossings has far-reaching ramifications for living conditions in Gaza. This control comes with legal and moral obligations to protect human rights and ensure access to everything needed to facilitate normal life, all the more so given the far-reaching damage caused to infrastructure by Israel’s assault on the Strip in May 2021. However, instead of fulfilling its obligations towards Gaza’s two million residents, half of whom are children, Israel is cynically exploiting its control of the crossings and deliberately undermining even the basic maintenance of water and sanitation services.

This cruel conduct is wrong and illegal, and it must come to an end. 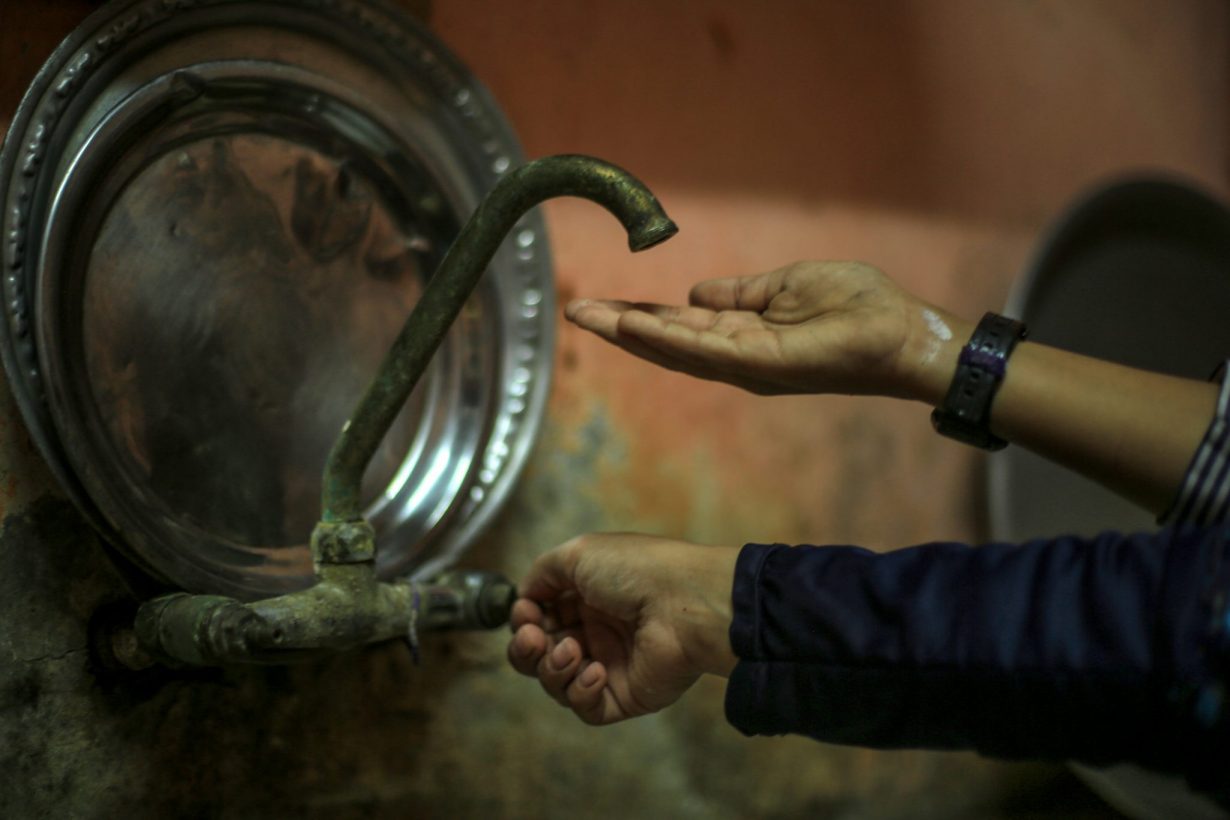 Only one in four households has access to water fit for human use. Photo by Amjad Elfayomi

The overall amount of water for human use available to Gaza residents is 110 million cubic meters (MCM), which supplies 85% of the actual need and comes from three sources, as of time of publication:

1) 85 MCM is extracted from about 300 wells in the coastal aquifer, Gaza’s only natural water reservoir. The water extracted from the aquifer is not potable and must undergo purification.

2) Three seawater desalination plants together put out about 8 MCM of desalinated water each year, currently serving about 300,000 people across the Gaza Strip.

3) Roughly 15 MCM is purchased from the Israel water corporation Mekorot.

According to CMWU figures, about 20% of the roughly 110 MCM of water supplied to the Gaza Strip by these three sources meet international quality standards and is appropriate for household use. Water through pipelines is delivered to Gaza households intermittently, every second or third day. Residents who can afford it keep reserves for daily use and also purchase water from private desalination companies that sell water from vehicle-mounted tanks door-to-door.

About 100 of Gaza’s smaller water desalination facilities are publicly owned and supply water to some 180,000 people, mainly destitute families who cannot afford to purchase bottled water or desalinated water from private facilities. Gaza residents say water from municipal sources is undrinkable due to high salinity levels. Some people rely on small water desalination plants built by aid organizations such as Oxfam or UNICEF, but those are only available in certain areas in the Strip and lack the capacity to meet demand.