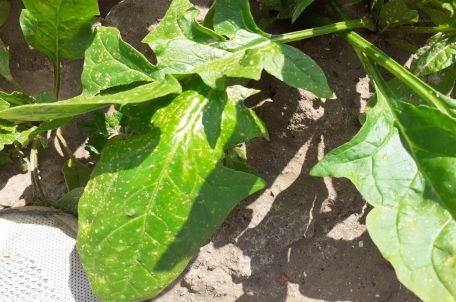 Spinach in Gaza, after the spraying was conducted. Photo by Forensic Architecture

January 28, 2020. Damage caused by aerial herbicide spraying conducted by Israel on three consecutive days (January 14-16) along Gaza’s perimeter fence has become visible on crops in the Strip. Individuals working with London-based research agency Forensic Architecture collected samples from fields located east of Jabalya, in northern Gaza, at distances of 100, 200, 400 and 600 meters from the fence. The damage to the crops is clearly visible on the samples they collected. According to local farmers, dunams more of parsley, peas, wheat, barley, spinach and other produce were destroyed entirely. The effect of the spraying appears several days after the spraying is conducted.

Riad Al Nisar, a farmer from Al Bureij Refugee Camp, who cultivates more than 20 dunams (about five acres) of parsley and zucchini crops about 300 meters away from the fence, reported that the effects of the spraying in the area on Wednesday and Thursday appeared on the crops clearly on Sunday. Al Nisar has suffered from significant financial losses caused by the spraying in previous years as well. In late 2018, he assessed that losses he had sustained amounted to at least 10,000-15,000 USD.

Another local farmer, Salah Al Najjar, has farmland located 300 to 600 meters from the fence in an area stretching east of Khan Yunis. His spinach fields were completely destroyed. He said his brother’s fava bean field, about a kilometer away from the fence, is also showing signs of damage. Al Najjar’s crops have been severely impacted as a result of previous spraying. 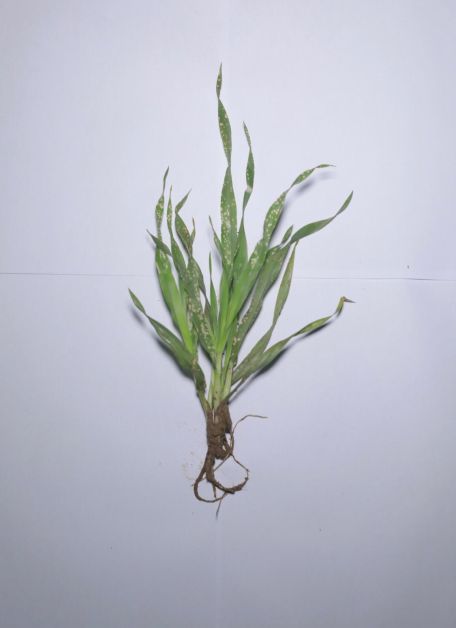 A sample collected after the recent round of spraying. Photo by Forensic Architecture

A video update by Forensic Architecture confirms the farmer’s assessment that the spraying was timed so that westward-blowing wind would carry the chemical agents used in the spraying into the Strip. Farmers were not given any notice, leaving them unable to take precautions to protect their crops or harvest them in advance to avoid further losses.

In response to Freedom of Information requests by Gisha, Israel admitted to having conducted aerial spraying over Israeli territory near the perimeter fence almost 30 times between 2014 and 2018. The army has stated that the spraying is conducted in order to expose the terrain “to enable optimal and continuous security operations.” No incidents of spraying were recorded in 2019. It is estimated that aerial herbicide spraying by Israel has affected a total area of 7,620 dunams of arable land in the Strip. In July 2019, Forensic Architecture published a multi-media investigation into the practice, based in large part on research and legal work by human rights organizations Gisha, Adalah, and Al Mezan. The report strengthened the organizations’ findings whereby aerial herbicide spraying by Israel has damaged lands deep inside Gaza.

Last Thursday, Gisha, Adalah and Al Mezan, sent a letter to Israel’s Minister of Defense, Military Advocate General, and Attorney General, arguing that such a disproportionate measure, with detrimental impact on livelihoods and the health of the civilian population, is unlawful under both Israeli and international law, and calling on Israeli authorities to stop the practice immediately.