In June 2007, Israel banned the exit of goods from the Strip, including processed foods, as part of its strategy of ‘economic warfare’ against Hamas. Processed foods are any food that has undergone an adaptation and manufacturing process, for instance, olive oil, date paste, cookies, and potato chips. Prior to the 2007 ban, 80 percent of processed food products produced in Gaza were marketed outside it, mainly in the West Bank and Israel, Gaza’s natural markets. According to the Palestinian Federation of Industries, processed food products accounted for 33 percent of manufactured goods from Gaza sold in the West Bank.

Starting in late 2014, Israel began allowing some goods to exit Gaza, but initially not processed foods. It allowed export of processed foods abroad in late 2019, and, from late 2020, there has been very limited marketing in the West Bank under restrictive conditions, which Israel frames as a necessary response to food safety concerns. Until this day, there is no marketing of Gaza processed foods in Israel.

Under international law and by virtue of its prolonged and ongoing occupation of the Palestinian territory, including Gaza, Israel has an obligation to enable normal life in the Strip. This entails facilitating economic activity, including movement of goods, and protecting the human rights of residents of Gaza, subject only to reasonable, proportionate measures to safeguard security.

The following policy paper tracks the changes in policy that have facilitated limited exit of processed foods from Gaza in recent years, and makes recommendations for removal of barriers to trade.

In April 2019, in response to a petition by Gisha on behalf of a processed foods-producing company, the Israeli authorities claimed that there was no longer a ban on the marketing of processed foods in the West Bank and abroad, but at the same time said that there was no mechanism in place to ensure safe transfer of the goods, from the perspective of food safety, and continued to block items from exiting. In late 2019, Sarayo Al Wadia, the petitioner in Gisha’s case, managed to export chocolate-covered marshmallow wafers to the Bahrain, and more products by the company and others followed to other destinations abroad.

Restrictions remained on marketing to the West Bank until 2020, when, in response to an initiative by the Dutch government, Israel agreed to allow products to be transferred to the West Bank as long as they met standards for entry to the European Union market. In November 2020, Sarayo Al Wadia shipped products to the West Bank for the first time since 2007. Despite this ostensive breakthrough, the reality is that the Israeli authorities impose very stringent conditions in a process which de facto bars most processed foods companies in Gaza from being able to market their goods.

The Israeli government continues to argue that there are food safety risks to allowing Gaza processed food products into the Israeli market, and even when it comes to Gaza products reaching the West Bank market – i.e. internal Palestinian trade – that there is a risk of unsafe products ‘leaking’ across the border into the Israeli market. At the same time, Israel is willing to accept a leakage risk when it comes to West Bank products. If Israel took its obligations to Gaza residents and facilitating economic activity in the Strip seriously, it could of course take measures to facilitate access from Gaza by enforcing greater controls of merchandise at crossings and also testing products from Gaza itself. Instead it applies sweeping restrictions that continue to undermine an important sector in the Strip.

On July 27, 2022, Israel’s Gaza Coordination and Liaison Administration (CLA) communicated a new procedure for marketing of processed foods from Gaza to the West Bank to the Palestinian General Administration for Borders and Crossings (GABC) as follows: 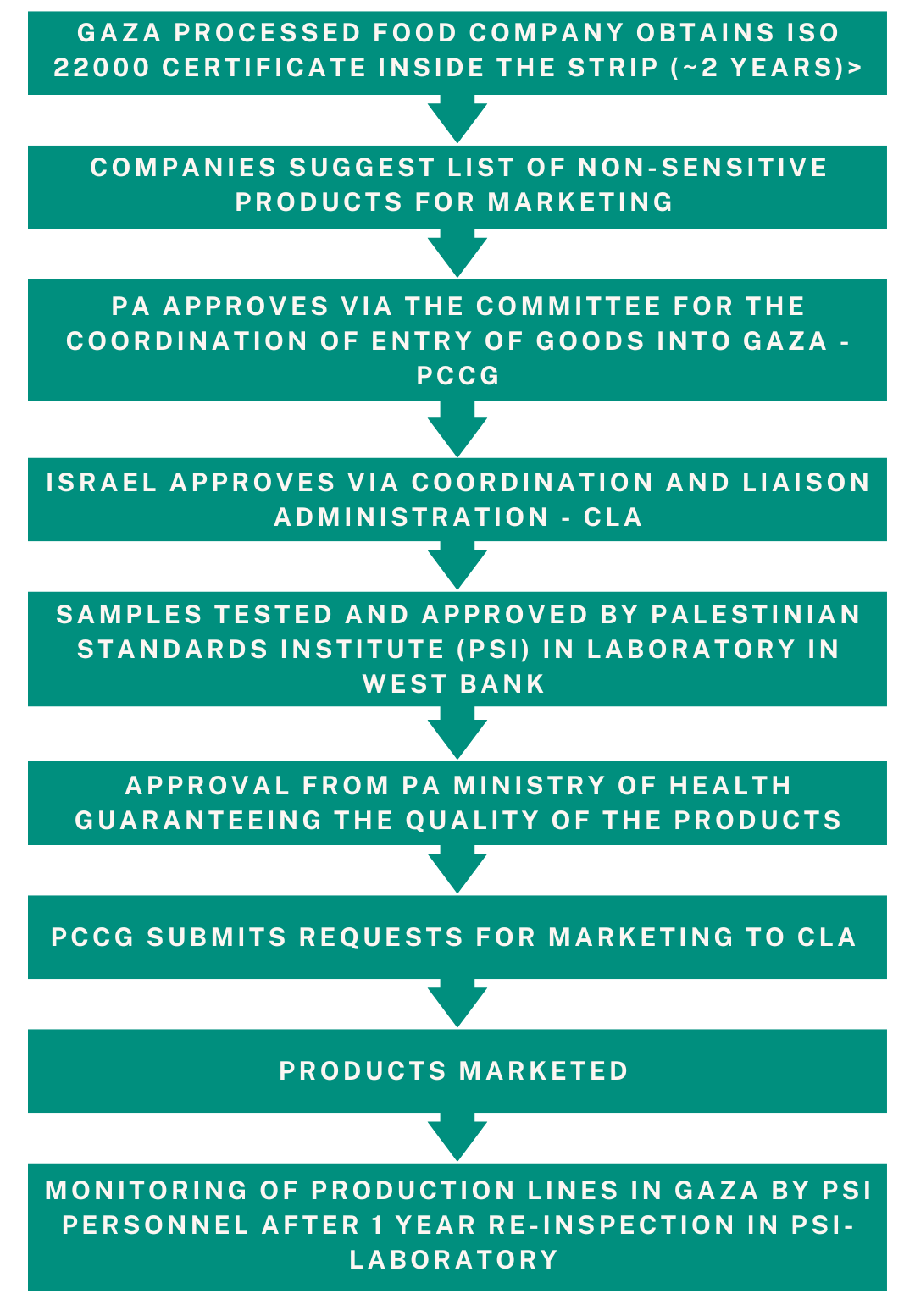 This evolved from a pilot program established in 2020 by the Dutch Representative Office for transfer of processed foods from Gaza to the West Bank. According to conversations with Dutch diplomats, the pilot was intended to build momentum for exit of the goods by addressing Israel’s food safety concerns and the need for coordination between various actors. Under the pilot, the Dutch government undertook to send products to the Netherlands for testing (rather than the PSI laboratory in the West Bank), to ensure compliance with EU product standards. The Dutch, as well as other donors, also support companies financially in adapting their production lines in order to meet these standards, which are certified by the International Organization for Standardization (ISO) under a protocol called ISO 22000 for food safety management. The main change in the procedure communicated in July is that Israel will now accept testing of products by the Palestinian Standards Institute in the West Bank rather than insisting that products be shipped out and tested in the Netherlands, but officially, it continues to demand that companies be certified under the ISO 22000 certification process.

Since the original Dutch pilot began and until November 2022, two companies had marketed processed foods in the West Bank: Sarayo al-Wadiya sent 63 shipments (at a value of almost 4.5 million ILS) and Maareb sent one shipment to the West Bank. Thirteen companies have the requisite ISO 22000 certification, and 12 additional companies are in the process of obtaining their certification.

Israel’s insistence on companies undergoing ISO 22000 certification continues to translate to unreasonable barriers to trade. Even with outside financial support, only the largest companies in Gaza can afford to undertake the certification process, as it often entails shutting down production lines and ordering expensive machinery and equipment, usually defined by Israel as “dual-use,” which are difficult to obtain. Until now, Israel also refuses to allow items containing any animal products, defined as ‘sensitive’ products, or liquids to be marketed.

This means that smaller companies, comprising about 47 percent of Gaza processed foods companies, and companies which manufacture cookies and biscuits, ice cream, and beverages, also comprising a large part of the sector, can only sell their products on the local market, with its limited purchasing power and size. What was deemed to be a “temporary, trust-building” exercise has now become a norm that Israel is insistent upon, despite the heavy burden and cost of compliance that excludes most companies in Gaza. Even those companies that are ISO-certified can only market the specific catalogue of items that have approval via the entire process outlined above; each new product – even with minor changes in composition that might include a variation of flavor – must go through the entire approval process again.

In addition to Israeli restrictions on the export and marketing of processed foods, the sector faces a number of additional hurdles, including restrictions Israel places on travel of manufacturers and traders to Israel and the West Bank; irregular and insufficient power supply in Gaza; the high cost of fuel to run generators when electricity is unavailable; systematic delays and sometimes prohibitions by Israel on the entry of essential items and equipment necessary for the maintenance of factory production lines under its “dual-use” policy; high transport costs, including due to fees imposed by Israel and limitations imposed at Kerem Shalom Crossing, and; punitive closures of Kerem Shalom Crossing which block marketing of goods and also reduce customer confidence in the reliability of access to products from Gaza.

Rather than facilitating movement of goods from Gaza, in line with its obligations as occupying power and prior agreements, the Israeli government has mired Gaza’s processed foods companies in bureaucracy and stalled their access to markets. It is our position that the Israeli government must facilitate movement of goods from Gaza, and particularly within the Palestinian territory, without imposing unreasonable and unnecessary barriers.

Recommendations to the Government of Israel:

June 2007: Israel stops the exit of processed foods from Gaza, with the tightening of the closure.

November 2014: Following the Gaza war in 2014, as part of ‘easing’ measures, the Israeli authorities began to allow limited exit of goods from Gaza, but not processed foods. Applications submitted by manufacturers and business owners from the industry to market the goods in the West Bank or export abroad were not answered by Israel.

June 2015: The Israeli authorities issued a procedure (Hebrew) authorizing export of goods from Gaza abroad. The procedure did not reference exit of processed foods to Israel or the West Bank. In practice, even leading Gaza industrialists were unfamiliar with the procedure, and no processed food products were exported abroad.

July 2018: Gisha petitioned the High Court against the de facto Israeli ban on exit of processed foods, and demanded that the owners of the Sarayo Al-Wadiya snack company be allowed to sell its products in the West Bank and abroad.

April 2019: In the state’s response to Gisha’s petition, it claimed that there was in principle no ban on export or marketing of processed foods to the West Bank, but noted that goods would need to be “acceptable to [Israeli] public health considerations.” The state agreed to examine a new application by Sarayo Al-Wadiya’s for the export and marketing of its goods.

July 2019: The Israeli authorities published an updated procedure (Hebrew, updated from June 2015) for “exporting and marketing goods from the Gaza Strip,” stating, for the first time, that marketing is also subject to approval by the Israeli Ministry of Health.

November 2019: Following numerous enquiries, Gisha finally received a response from the Israeli Ministry of Health about the arrangements for the exit of products from Gaza. The Ministry of Health stated that it is considering allowing marketing to the West Bank, as part of cooperation with the Palestinian Authority Ministry of Health (Ramallah). It set stringent criteria, including becoming ISO 22000-certified “under the supervision of representatives of the Dutch government.” Sarayo Al Wadia becomes the first company to export processed foods abroad since the 2007 ban.

November 2020: Shipment of snacks produced by Sarayo Al Wadia are marketed to the West Bank under the Dutch pilot for the first time since 2007.

January 2021:  One truckload of snacks from another company, Maareb, exit to the West Bank under the pilot.

July 2022: New procedure allows the Palestinian Standards Institute (PSI) to test ISO-certified, non-sensitive products in PSI-certified laboratories in the West Bank, instead of products being transferred for inspection in the Netherlands.