October 17, 2012. A three-and-a-half-year long legal battle waged by Gisha has led the Israeli Ministry of Defense to reveal the document entitled “Food Consumption in the Gaza Strip – Red Lines”. The document includes information about the policy of restricting the entrance of food to the Gaza Strip, which was in effect between 2007 and 2010. Two versions of this document, in the format of PowerPoint presentations, were provided to Gisha over the Sukkot holiday, after the Israeli Supreme Court rejected the state’s appeal against disclosing the document on September 5, 2012. a position paper provides a general background for the presentation, an analysis of its content and a description of the legal proceedings that resulted in its publication. We also wish to raise a few important points that we think emerge from the presentation.

The sharp decrease in the incoming quantities of food products caused supply to be unpredictable and contributed to a significant rise in food prices in Gaza. Nonetheless, Israel’s policy during the period in question did not result in widespread hunger or ongoing shortages of basic food products in the Gaza Strip. According to World Food Programme reports from those years, Gaza merchants reported isolated shortages and difficulties maintaining supplies of basic products such as flour, sugar, dairy products and oil. In addition, the severe economic crisis caused by the closure, particularly by restrictions on the entrance of raw materials and the marketing of goods outside the Strip which led to a rise in the unemployment rate, resulted in increased dependence on aid. Between the second quarter of 2007 and the second quarter of 2008, the rate of unemployment soared by 72% (from 26.4% to 45.4%). A report by the United Nations’ Office for the Coordination of Humanitarian Affairs (OCHA) found that the number of Gaza residents receiving humanitarian aid rose from 63% of the population in 2006 to 80% in 2007. The main repercussions of the closure at the time were, as they largely continue to be today, increased poverty, increased dependence on aid and denial of opportunities for economic development, higher education and access to dignified work.

The red lines presentation, prepared in January 2008, summarizes work conducted by the security establishment in cooperation with the Israeli Ministry of Health which analyzed ordinary food consumption by Gaza Strip residents. Throughout the legal battle for publication of the presentation, and in the cover letter sent to Gisha along with the presentations, the Coordinator of Government Activities in the Territories (COGAT) claimed that: “the aforementioned presentations are drafts and have never been used as a basis for implementing civilian policy toward the Gaza Strip”. The statement is perplexing considering the fact that the quotas that were set for bringing in goods at the time precisely match some of the quantities evidently calculated over the course of the work done by security and health ministry officials (see details in the position paper).

A look at the data on goods that entered Gaza from Israel immediately after Hamas seized control of the Strip and Israel’s tightening of the closure reveals that the quantities that were cleared for entry did not reflect the “red lines” set in the presentation (see table), and were in fact smaller. The calculations made in the presentation led to the conclusion that the “daily humanitarian portion” Gaza’s residents needed would require bringing in 106 trucks from Israel five days per week. In the first year following Hamas’ takeover of the Strip and the tightening of the closure (July 2007 to June 2008), an average of 90 trucks entered each scheduled working day.
In his testimony before the Turkel Commission, COGAT, Major General Eitan Dangot, explained that the quantity of goods brought into the Gaza Strip was restricted also as a result of the firing of rockets at Israel, particularly at the crossings. Without disputing that, we would like to remind that previous documents that were published as a result of Gisha’s work demonstrate that the official policy included restrictions on food that had nothing to do with any direct and immediate security need. One of Gisha’s main arguments at the time was that because of periodic closures resulting from escalations in violence, Israel should have increased access for supply of goods on the days the crossings operated normally. This argument was rejected by the Israeli Supreme Court.

The presentation describes a monitoring mechanism for a policy that, in effect, deliberately reduced the standard of living in Gaza. Statements made by politicians and top security officials at the time indicate that the policy was meant to put pressure on Hamas. It had two fundamental tenets:  the legal position that after the disengagement and Hamas’s takeover of the Strip, Israel had only minimal humanitarian obligations toward Gaza’s residents, and a political-security rationale that indiscriminate pressure on the entire population is a legitimate and effective measure to be implemented in the context of the armed conflict with Hamas.

First and foremost, we note that preventing the transfer of basic items to a civilian population as a means of exerting pressure on political or military actors violates international humanitarian law. Israel, which exercises significant control over the civilian population’s access to food, thus bears obligations toward that population. The fact that Egypt did not open a regular and reliable channel for supply of food to Gaza does not detract from Israel’s obligations (for a complete analysis of Gisha’s position about the legal status of Gaza, see Scale of Control).

These days, it is difficult to find a politician or security expert in Israel who would say that the closure policy of 2007-2010 benefitted Israel politically or in terms of security. For more than two years now, Israel has not imposed any restrictions on the entrance of food to the Gaza Strip. Yet, the two fundamental tenets of the policy, the legal position and the political-security rationale, remain the basis for the current policy, which the security establishment calls “the separation policy”. As part of this policy, sweeping and indiscriminate restrictions are placed on the movement of goods and people between Gaza and the West Bank. Once again, some of the restrictions are imposed devoid of a concrete security necessity. The restrictions cause severe damage to the economy and are accompanied by declarations that one of the goals of the policy is to put pressure on the Hamas regime and bolster the Palestinian Authority in the West Bank.

While the security establishment has been forced to disclose documents that bring an old policy up for critical discussion, the current policy remains shrouded in secrecy. It is unclear which political or military actors formulated the “separation policy”, what its objectives are and how it is monitored. Misguided policies are destined to fail and to be exposed. The question is whether this time, policy-makers will choose to come out and explain to the public whom they purport to serve how the restrictions on movement currently imposed on Gaza’s residents are determined and how they conform to the legal and moral norms to which Israel considers itself bound.

Gisha’s position is that Israel must refrain from imposing restrictions on movement which are not necessary for maintaining security and which disproportionately harm the ability of the civilian population to lead normal lives and engage in economic development. 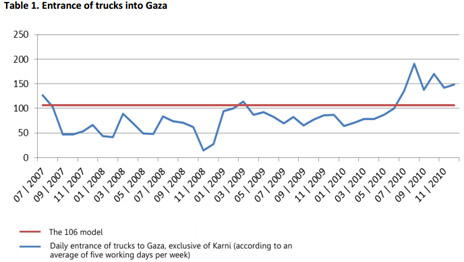