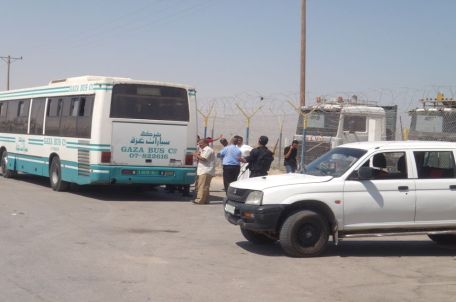 February 4, 2019. Rafah Crossing was reopened yesterday for movement of people between Gaza and Egypt, and is due to remain open until further notice, according to the United Nations Office for the Coordination of Humanitarian Affairs (OCHA). Salah A-Din Gate, which is adjacent to the crossing, was reopened by Egypt last Thursday for movement of goods into the Strip, and has remained open. Goods that had been held up on the Egyptian side of Salah A-Din, some of them for as long as ten days, including cooking gas, construction materials, food, and other items, entered the Strip as soon as the gate was reopened.

Since it first started being used for limited entry of goods from Egypt into Gaza in 2015, the variety of goods entering the Strip via Sala a-Din Gate has increased, and now includes food, construction materials for the private sector, and raw materials and equipment used in industry and to maintain infrastructure. During the electricity crisis of June 2017, the gate was also used to bring fuel into the Strip, initially designated for Gaza’s power plant. Though it cannot replace the commercial crossing with Israel, Kerem Shalom, which can facilitate movement of a much higher volume of goods, the continued opening of Salah A-Din Gate is crucial for Gaza’s economy.

According to media reports, the decision to reopen Rafah Crossing indefinitely was reached following meetings between the UN Special Coordinator for the Middle East Peace Process, Nickolay Mladenov, Egyptian officials, and Hamas officials. Last week, Egypt opened Rafah for exit from Gaza but announced that the crossing would only remain open for three days.

From mid-May 2018 until January 8, 2019, Rafah Crossing was open about five days per week for movement of people in both directions. Egypt allows people from the Gaza Strip to enter its territory according to restricted criteria; only those with referrals for medical treatment at Egyptian hospitals, students with visas to study in Egypt or third countries, and holders of foreign residency or foreign passports are eligible for travel from Gaza to Egypt via the crossing.

Given the severe restrictions on movement of people imposed by Israel at Erez Crossing, movement through Rafah Crossing, limited as it may be, provides a vital life line for Gaza residents, and must remain open.