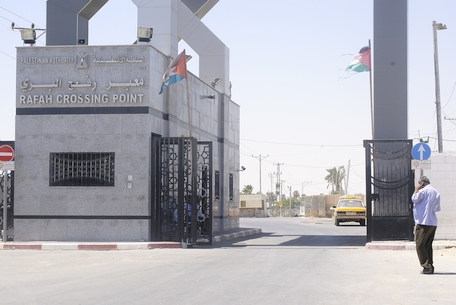 January 16, 2019. Last Sunday, January 6, the Palestinian Authority’s (PA) Ministry of Civil Affairs announced its decision to remove its employees from Rafah Crossing between Gaza and Egypt. In the evening, Hamas security forces arrived and took over control of the crossing.

In a short announcement published in Palestinian media, the Ramallah-based PA noted that the decision was in response to harassment and arrests of its employees by the de facto Hamas authorities in the Strip. Control of Gaza’s crossings was passed to the PA in November 2017, as part of the implementation of agreements between the Palestinian factions, Fatah and Hamas. Palestinian Authority Minister of Civil Affairs Hussein Al Sheikh said in an interview that the PA’s departure from Rafah Crossing is part of the administrative, political and economic measures with which the PA is planning to pressure Hamas into ending the factional split.

On Monday, January 7, Rafah Crossing was closed due to the Orthodox Christmas holiday. On Tuesday, January 8, Egypt only allowed Palestinians to cross into the Strip from Egypt, but blocked exit from the Strip to Egypt via the crossing. As of today, limited entrance of goods into Gaza via Salah A-Din Gate, adjacent to the crossing, is still taking place.

Generally, Egypt allows movement of people from the Gaza Strip into its territory according to restricted criteria; only those with referrals for medical treatment at Egyptian hospitals, students with visas to study in Egypt or third countries, and holders of foreign residency or foreign passports, are eligible for travel from Gaza to Egypt via Rafah Crossing. Since mid-May 2018, Rafah Crossing has been open about five days per week for movement in both directions. This is the longest period of time the crossing has been opened consecutively in about five years.

Given the severe restrictions on travel through Erez Crossing, controlled by Israel, and despite the restrictions imposed by Egypt on movement through Rafah, the crossing has become a crucial gateway for Gaza residents to the outside world. It must remain open. Residents of the Strip must not be held hostage to political disputes between actors in the region, and their fundamental right to freedom of movement must be respected.