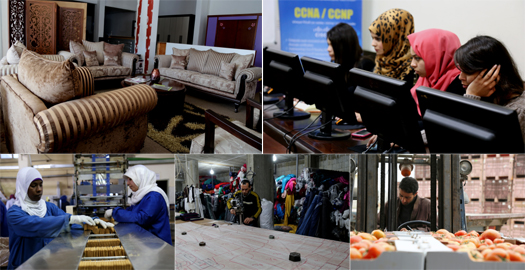 Industries whose representatives were interviewed for the study. From right to left, top to bottom: high-tech, furniture, agriculture, textile, food processing. Photos: Gisha

On November 6, 2014, a truck left Gaza on what one might call a historic trip. The cardboard boxes it was carrying, loaded with ten tons of cucumbers, were to be sold in Hebron. It was the first time Israel allowed Gaza goods to be sold on the private market in the West Bank in seven and a half years. Since that morning, hundreds of trucks loaded with goods have left Gaza for West Bank markets, which had been blocked to Gaza residents since Hamas took control the Strip.

Given that Israel and the West Bank had been Gaza’s main trade destinations until 2007, the ban on accessing these markets virtually eliminated economic life in Gaza and produced disparities between the two parts of the Palestinian territory with respect to nearly every economic parameter. Allowing the sale of Gaza made and grown goods in the West Bank, and recently also in Israel to a limited degree, is critical and gives ground for cautious optimism.

Around the same time, we brought together leading figures in five manufacturing sectors in Gaza for focus group discussions. We wanted to understand what the potential of trade with the West Bank means to them, and what obstacles they face. Each focus group included representatives from one of Gaza’s main productive sectors: furniture, agriculture, textile, food processing and information and communication technology (ICT). Participants discussed the many years of closure, shared their thoughts on accessing West Bank markets, the obstacles that stand in their way and their hope for a better future.

Many estimated that under reasonable access conditions, they would be able to sell between 30% and 90% of their output capacity in the West Bank (figures vary depending on the sector and the manufacturer). Many also think that despite the acute difficulties they face, they maintain inherent advantages over West Bank manufacturers. People in the furniture industry spoke about a skilled labor force, while other sectors mentioned competitive prices, the high quality of their goods and business relationships that have survived the closure.

But there are difficulties. Renewing trade requires rekindling personal relationships and undertaking market, product and cost assessments in a market which has obviously changed and adjusted since Gaza was cut off from it. None of this can happen without a significant overhaul of travel restrictions. This is very much the case for Gaza ICT companies, whose representatives talked about lost tenders and relationships that fell apart over the years. But it’s also true for farmers, furniture traders and textile and food processing company executives. Many mentioned the high cost of shipping goods through Kerem Shalom Crossing and the constant fear, predicated on years of experience, of unpredictable closings of the crossing.

The separation policy, through which Israel hoped to further political and security goals by cutting Gaza off from the West Bank, has failed. Civilians have paid the price. Top security officials are now saying that Palestinian economic recovery, particularly in Gaza, is key for regional security, expressing active support for measures that would help this recovery along.

Many of the challenges mentioned in the focus groups can be overcome without investing much time or money, but rather just a good dose of political and goodwill. Israel holds the key, because Israel operates the only commercial crossing serving Gaza’s 1.8 million residents and the only pedestrian crossing connecting it to the other part of the Palestinian territory. When the ban on access to West Bank markets was reversed, Gaza manufacturers and traders jumped on it, sending goods through almost immediately. This demonstrated how much its residents yearn for a future that offers better possibilities.