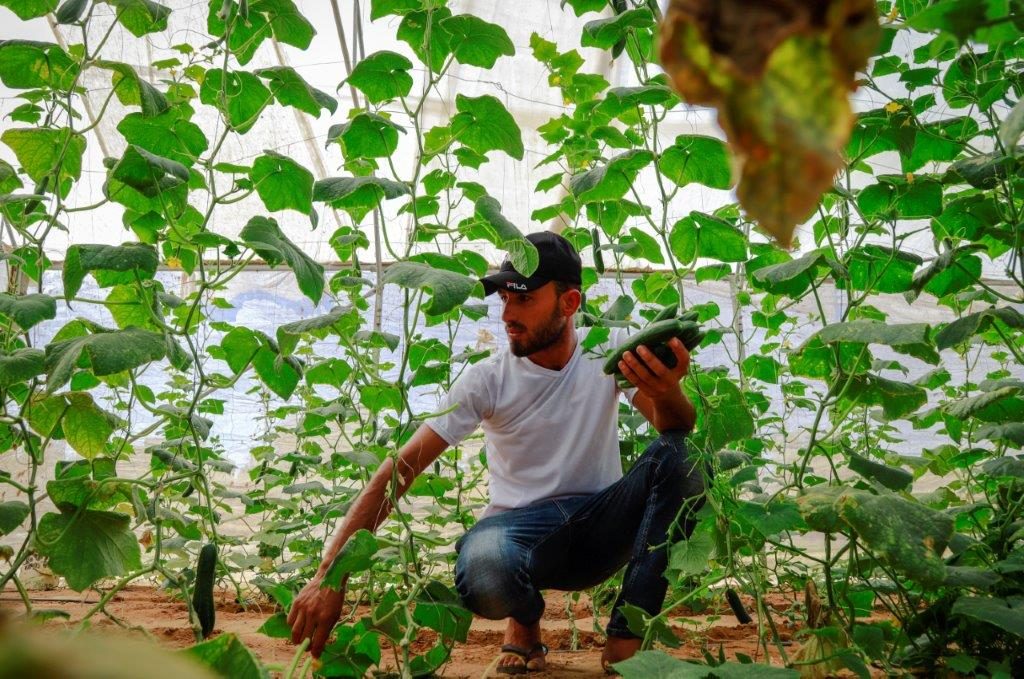 A cucumber greenhouse in Gaza. Photo by Asmaa Elkhaldi

April 5, 2020. For years, restrictions imposed by Israel over movement of people and goods to and from Gaza have harmed the Strip’s farmers and their livelihoods. Israel determines what produce may be shipped for sale outside Gaza, where to, and when. In addition to the restrictions Israel imposes on access to agricultural lands near the fence separating Gaza and Israel, and aeriael herbicide spraying it conducts along the fence, Israel also restricts entrance of farming equipment and materials that it defines as “dual-use,” some of which are necessary for growing, improving the quaity of produce and extending its shelf life.

Like economies across the globe, Gaza’s economy is currently under increased pressure due to measures taken to prevent further spread of COVID-19. On Wednesday (April 1), Gisha sent an urgent letter to Israel’s Minister of Defense and the Coordinator of Government Activities in the Territories demanding that Israel take immediate action to protect Gaza’s economy at this time, focusing especially on steps to ensure food security for the civilian population in the Strip. The letter to pointed to several measures that Israel should implement, including removal of restrictions hindering Gaza’s farming sector, a major source of employment and food supply in the Strip.

In the summer of 2019, media reports (Hebrew) suggested that Israel had decided to relax restrictions on the entry into Gaza of items it defines as “dual-use,” including fertilizers and disinfectants for farming, yet Israel continues to deny Gaza access to these essential materials. Growers and suppliers have told Gisha that requests to bring in fertilizers and disinfectants are brought up repeatedly in meetings with Israeli officials, but to no avail. They estimate that routine supply of these substances could increase yield by as much as 25 percent.

The lack of transparency surrounding the process of coordinating the entry of items defined by Israel as “dual-use” has been a central obstacle to farmers in Gaza. Suppliers who have purchased goods often see their shipments delayed or seized at Kerem Shalom Crossing even after Israel ostensibely approved their entry into the Strip.

One of the major suppliers in the sector told Gisha that after he had already obtained a release order for the fertilizers he had imported and were being stored at Ashdod Port in Israel, the shipment was stopped at Kerem Shalom Crossing on the grounds that the chlorine content in the fertilizer supposedly exceeded the permitted concentration. The supplier was forced to return the goods to storage at Ashdod Port, at his own expense. After again obtaining the necessary permits, he tried to bring in his goods for a second time, but again, the shipment was denied entry into Gaza. The supplier said that every time he transports the shipment to Kerem Shalom and back to the storage facility in Ashdod, it ends up costing him 5,000 ILS (about 1,375 USD). He also has to cover the cost of prolonged storage in Israel, an astounding total of 30,000 ILS (8,250 USD) so far.

The significant control Israel maintains over substantial aspects of the lives of Gaza’s residents comes with an obligation to protect basic rights and normal living conditions in the Strip, an obligation which Israel consistently evades. As Gaza braces itself to tackle COVID-19, Israel must ensure that its economy is afforded the greatest possible protections. Allowing the agricultural sector access to the materials it needs continues to function is critical for livelihoods, local food supply, and the economy as a whole.