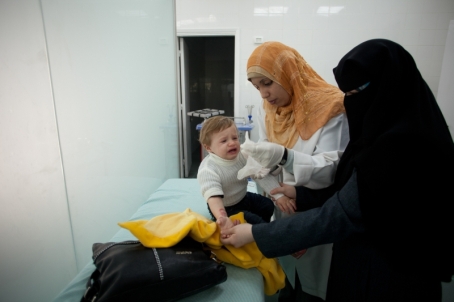 many patients, especially children, would have difficulties accessing treatment with no accompanying persons who meet the threshold requirement. Photo: Eman Mohammed

Update: December 1, 2015. Haaretz reported today that medical sources in Gaza told them that from now on, companions to medical patients who are under age 55 will have to undergo security screenings (apparently beyond those normally required and regularly administered). According to these same officials, these checks are considerably lengthy and according to the experience of the Palestinian Civil Affairs Committee, mean that those under 55 are unlikely to get permits. The Office of the Coordinator for Government Activities in the Territories (COGAT) denied that there had been any changes to the age criteria for companions of medical patients, but an army official confirmed that indeed those under 55 would undergo security inspections at the order of the Shin Bet (or Israeli Security Agency). We note that according to the Palestinian Central Bureau of Statistics, a little over 6% of the population in Gaza is over age 55.

November 26, 2015. The Palestinian Civil Affairs Committee department that handles applications from medical patients went on strike today, to protest the policy of the Coordinator of Government Activities in the Territories (COGAT) regarding medical patients from Gaza who require treatment in Israel or the West Bank, as well as the treatment they receive from officials at the Erez crossing.

Sources in the Palestinian Civil Affairs Committee told Gisha that yesterday, they were verbally informed by COGAT’s office that the age of Palestinians permitted to accompany medical patients who enter Israel for treatment would now be limited to 55 and over. The immediate effect of restricting the age of persons accompanying patients is that many patients, especially children, would have difficulties accessing treatment with no accompanying persons who meet the threshold requirement.

The committee is also protesting Israel’s decision to further restrict the types of illnesses for which permits to enter Israel for treatment would be given. Kidney patients and individuals with ophthalmic, neurological and orthopedic conditions have experienced difficulty in obtaining permits. The committee says that Israel claimed the decision was made to limit treatment after it was discovered that patients in these categories were late returning to Gaza after received treatment.

The Palestinian Civil Affairs Committee noted a drop in the percentage of applications made by patients in these categories that were approved by the military over the last few weeks.

Physicians for Human Rights-Israel – which offers assistance to individuals whose requests for travel for essential treatment have been refused by Israel – says that since August, more than half the applicants belong to one of the four medical categories that were further restricted by Israel.

An increasing number of patients who have received permits to exit Gaza have been questioned and interrogated at the Erez crossing recently, and we have learned that patients returning home to Gaza after lengthy treatments abroad have also faced difficulties.

In unofficial conversations, COGAT officials say that there have been no changes to the categories for travel by medical patients. Either way, COGAT has not published new information on its website since June and has not distributed the updated document listing who is permitted to travel to and from the occupied Palestinian territory (the “closure permissions status” document) other than to Gisha directly, and only after we’ve requested it.

If it turns out that Israel has, in fact, significantly reduced patients’ chances of accessing essential treatment – the matter is very serious. The control Israel exercises over civilian life in Gaza and which significantly impacts the quality of life in the Strip, comes with obligations, including making critical medical treatment available to those who need it. Not so long ago, Israel took pride (Hebrew) in the particularly high percentage of applications for treatment that get approved – more than 90%. COGAT’s website stated that this percentage demonstrates Israel’s treatment of humanitarian and medical cases and the importance and urgency attached to processing these types of requests”. Since 2007, COGAT’s policy was to approve travel in cases of “exceptional humanitarian circumstances”, though now it appears that the policy does not even adhere to this minimal principle.

Indiscriminately harming a group of people who are by definition disempowered, suffering from chronic diseases and requiring special medical treatment – is more than just unlawful, it is immoral and it must be stopped immediately.