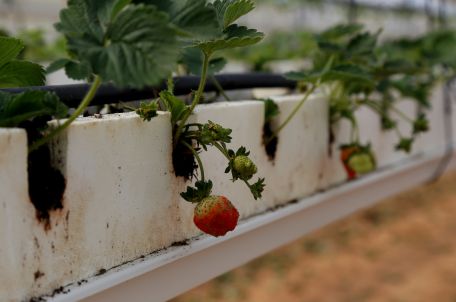 hanging method of strawberry in a greenhouse in Gaza. Photo by Gisha

December 9, 2018. It is strawberry season again in Gaza. The first shipment left Gaza for the West Bank on November 25. According to the Gaza Ministry of Agriculture, this year about 1,200 dunams (roughly 297 acres) were used for growing strawberries, which is 250 dunams (some 62 acres) more than last year. Farmers employ a hanging method in greenhouses for the equivalent of about 12.5 dunams (about 3 acres) of the total area used for growing strawberries. One dunam (about a quarter acre) of hanging strawberries produces between eight and ten tons of strawberries, compared to about three tons per quarter acre grown on land.

The increase in land use for strawberry farming is largely attributed to the success of last year’s season, during which farmers sold about 1,300 tons of strawberries, the vast majority of which were marketed to the West Bank. The UN Food and Agriculture Organization estimates that Gaza strawberries sold outside the Strip brought in 2.5 million US dollars last season.

Gaza’s strawberries have a reputation for their sweetness and good quality. The sale of produce outside the Strip, and in particular strawberries, accounts for a significant portion of the Strip’s meager but vital economic activity. In order to turn a profit, farmers require access to the larger, more active markets of the West Bank and Israel. Farmers estimate each quarter-acre of strawberries supplies two to three jobs over the season, meaning farmers are expected to employ 2,500 to 3,000 people this year. More strawberries grown and sold means more jobs in the Strip.

Last week on its Facebook page, the Coordination of Government Activities in the Territories (COGAT) celebrated the start of the season, however, in a recent meeting with Israeli officials at Erez Crossing, Gaza growers and suppliers raised three major issues that have been holding back Gaza’s farming industry in general and the strawberry sector in particular, for years.

The first issue is a severe shortage in soil disinfectants and fertilizers, which Israel bans from entering Gaza. Disinfecting the soil prior to planting and using the appropriate fertilizers have a tremendous impact on crop yield and quality. According to farmers, insufficient potassium decreases the already short shelf life of the strawberries. Back in July, farmers put in a request to the Gaza CLA, via the Palestinian Civil Affairs Committee, to bring in fertilizers and other essential items, but received no answer.

The second impediment is the lack of travel permits for farmers and suppliers, some of whom are blocked due to alleged “security reasons” (an attribution that is unfortunately liberally made). Travel permits are critical in the fruit business. They are needed in order to supervise how the fruit is shipped, to collect payments, and make contacts with distributors and retailers.

The third issue concerns storage conditions at Kerem Shalom Crossing. Strawberries are one of the most weather sensitive crops. When kept for long stretches of time at the crossing with no cover from the sun or rain, this damages the fruit, further decreasing its shelf life. Suppliers have reported serious losses due to weather damage to fruit and packaging.

In the meetings with the CLA, suppliers once again requested permission to sell strawberries in Israel, emphasizing the disparity between how much Israeli produce is sold in Gaza versus how little Gaza produce is sold in Israel. The suppliers affirmed that they were prepared to meet any requirements and conditions in order to be granted the chance to market produce in Israel.

If COGAT wants to boast online about the opening of the strawberry season maybe it should respond positively to the legitimate demands of growers and suppliers in Gaza.