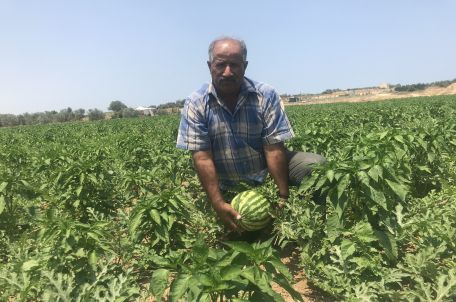 July 21, 2019. This year, for the first time since 2014, no aerial herbicide spraying was conducted by Israel near its fence with Gaza, with positive ramifications for the farming sector in the Strip. In a new video produced by Gisha in cooperation with our partner organizations, Adalah and Al Mezan, farmers and herders whose livelihoods depend on the lands closest to the fence with Israel attest to the potential of a season without spraying.

Today, London-based research agency Forensic Architecture launched a new report on Israel’s practice of conducting aerial spraying of herbicides along the Gaza border, based in large part on research and legal work conducted by the three organizations. The report strengthens the organizations’ findings that Israel’s aerial spraying of herbicides, which it admits was conducted almost 30 times between 2014 and 2018, has damaged lands and crops deep inside the Strip.

Since 2015, Gisha, Adalah and Al Mezan have cautioned against the practice of aerial herbicide spraying, and led a legal battle to expose information about it and demand that Israel put an end to the highly destructive and hazardous measure.

In response to a letter by the three organizations to the Israeli Minister of Defense, the Military Advocate General and the Attorney General, Israel emphasized (Hebrew) that it only conducts spraying over Israeli territory and above the fence with Gaza, claiming that special precautions are taken in order to minimize the reach of the chemical agents, and that the spraying is supervised and regulated.

Forensic Architecture’s analysis of first-hand videos reveals that the aerial spraying, which is carried out by commercial crop dusters hired by the Israeli Ministry of Defense operating on the Israeli side of the fence with Gaza, was conducted in conditions where winds carried the chemicals westward into the Strip and at damaging concentrations. Importantly, the report emphasizes that the Israeli practice of aerial spraying when the wind is blowing into Gaza “causes indiscriminate damage” where “the effects are less readily controllable, and the extent of damage on Palestinian farmland per spray is largely unpredictable.”

The aerial spraying infringes on fundamental human rights and violates Israeli and international law. There is no justification or legal basis for the continued use of this highly destructive practice, which causes disproportionate damage to residents of the Strip and their crops. We call on Israel to cease all spraying in the Gaza Strip area in the future in order to enable Gaza’s agriculture sector to develop and prosper.

For testimonies from farmers and herders in Gaza, see here.