In the summer of 2014, Ayman Abu Odeh lost his home. The building where he lived with his family was bombed by Israel during Operation Protective Edge. The two top floors, where his two brothers lived, were completely destroyed. Much of the ceiling of the first floor, where Abu Odeh and his family lived, was also destroyed. The building was declared unfit to live in, but Abu Odeh and his family continue to live there. They were offered a caravan in a nearby temporary housing lot, but they declined. Abu Odeh says he prefers to live in a semi-destroyed house, with the rain coming in from every direction. Conditions in the caravan lot, he says, are even worse.

On rainy days, his sons pack up their mattresses and blankets and spend the night at their grandmother’s. Abu Odeh fears this winter will be worse than the one before. Last year, Gaza was still on the agenda, he recalls. Aid agencies supplied mattresses, blankets and heating devices. He doesn’t think this will be the case this year.

Abu Odeh says that when the Gaza Reconstruction Mechanism started working, representatives of the Gaza Housing Ministry came by to assess the damage to his home. They gave him an authorization slip that says he is entitled to a reconstruction grant. He hasn’t heard from them since. One thing did happen though, the rubble from the top floors was removed. The family has had its fill of aid organizations, and though Abu Odeh says they’ve also had their fill of organizations that come to ask them to tell their story to outside visitors, he was willing to share his troubles with Gisha. 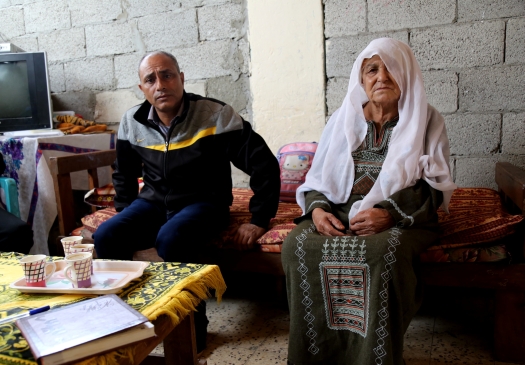 He prefers to live in a half-destroyed house, where the rains come in from every direction. Ayman Abu Odeh and his mother. Photo: Gisha

Over the last year, senior Israeli figures have spoken about the importance of reconstructing Gaza and of Israel’s commitment to Gaza’s economic development. In some cases, the change in rhetoric was also accompanied by changes in policy. For the first time since 2007, for example, Israel allowed some Gaza-made goods to be sold in its own territory and in the West Bank. The debilitating restrictions on the entrance of construction materials were replaced with an albeit complicated reconstruction mechanism. For a time, movement through Erez increased. The changes are far too limited to facilitate anything close to what the rhetoric might suggest or allow real development. They are not what’s going to reverse the United Nations’ prediction that Gaza will no longer be a livable place in four years’ time (not that life there is too tolerable at the moment in any case).

Today, December 10, is International Human Rights Day. If Gaza even gets mentioned, it’s usually not in the context of human rights but rather humanitarian aid or the utilitarian interests of this or that actor. More than a year after the fighting that devastated the population and left many parts of Gaza in ruins, the situation on the ground remains dire. Too few of the homes that were destroyed are being rebuilt, the rate of unemployment doesn’t drop below 40% and civilian infrastructure is in a state of collapse. Much of the aid funds pledged by various countries in late 2014 have been slow to arrive if at all.  Physical reconstruction is held up, and with it, the prospects for the economy and improvements to infrastructure and services.

The majority of Gaza’s residents are children. Tens of thousands of them live in conditions similar to Abu Odeh and his family. They deserve to dream and to make their dreams and aspirations come true. They deserve the kind of access that allows them to get an education, meet relatives, live in decent conditions, and see the world. They deserve it like everyone else does. The year 2016 can be a year of real change, one in which human rights are actually at the forefront. Respect for the right to freedom of movement and the lifting of restrictions no doubt would shift the statistics, as we demonstrated in a recent report about the economic potential of various sectors should movement improve, but it could also provide a glimmer of hope in a much troubled region. This can’t be a year in which the option is either a crowded caravan lot or a half-destroyed building. Life can be, should be – must be – so much more. 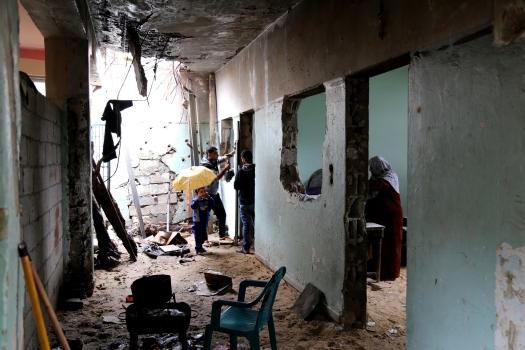 When it rains, the boys drag mattresses and blankets to their grandmother’s house. Photo: Gisha