To many Israelis, the title Coordinator of Government Activities in the Territories, or COGAT, doesn’t mean much. Despite its relative anonymity, COGAT is a large unit in the Israeli Ministry of Defense, headed by a major general, currently, Maj. Gen. Yoav (Poly) Mordechai. COGAT is the agency responsible for the coordination and implementation of the government’s civilian policies toward the Palestinian population in the West Bank and the Gaza Strip. Millions of people depend on COGAT for everyday needs like building permits, commerce permits, family visits and permits to travel to Israel and abroad. COGAT is tasked to assure the welfare of the Palestinian population and contribute to its progress and development.

To manage the lives of civilians under its control, COGAT, like any other government agency, drafts procedures and protocols that ostensibly provide information on how the system is meant to operate. The public meant to be informed by COGAT policies, and this will come as a shock to few – speaks Arabic. Logically, it would make sense for the procedures to be published in Arabic. Does this happen? Not exactly.

The COGAT website, where these procedures and protocols are typically published, hasn’t been active (Hebrew) for over a year now. COGAT claims that the website will be relaunched “at the end of August”. In the meantime, Gisha led a long, exhaustive legal battle to compel COGAT to post their procedures, which it eventually did on a temporary website. In fact, for years Gisha has been working to get the state to publish legislation, regulations, procedures and protocols that are vital to the Palestinian public, accessible in Arabic. Due to Gisha’s legal efforts, the court has ordered COGAT to publish a series of procedures and protocols that have never been made publicly available before, certainly not in Arabic. 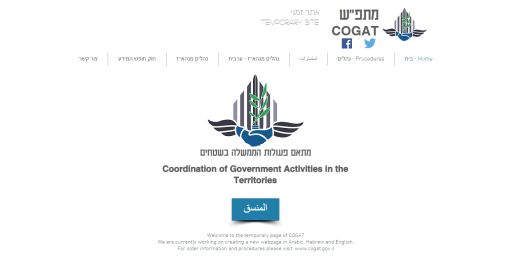 Here are two gems lifted from the translation:

This is pretty important information, especially if you’re a resident of Gaza who needs a medical examination for the purposes of legal proceedings taking place in Israel. This is how COGAT chose to make this critical information accessible:

The Hebrew word used for “instructing” in this sentence is a homonym for the single Hebrew word denoting “the school teacher”, which is how it was translated into Arabic, المعلم, making the phrase read, “subject to an order teacher the performance” and rendering the sentence completely meaningless. What is a confused Gaza resident who needs a medical exam to do? Maybe find some solace in the special permissions granted to the family members of Palestinian Authority VIPs, the details of this procedure are explained in Hebrew as follows:

The Hebrew word denoting the phrase “is permitted” is a homonym for the Hebrew word denoting “is happy”, which is the word chosen for the Arabic translation, سعيد. This happened twice in the same text, rendering sentences completely meaningless. It seems unlikely that a human being, let alone a professional translator, would make such mistakes.

These are just two examples out of a large and depressing selection, which includes entire sentences that were omitted, paragraphs that are utter gibberish and countless mistranslations (we tried to count them but gave up after several dozen basic ones).

After months of persistence on our part, COGAT managed to produce a document that was part unintelligible, part meaningless and shows total disrespect for Palestinians who need the information, not to mention Israeli taxpayers who fund COGAT. According to the unit’s business contract report, COGAT spent about 6,600 US dollars (25,000 Israeli shekels) on translation in 2015. We can only hope that not a single penny of this budget was spent on this unusable translation.

Reports about Defense Minister Avigdor Lieberman’s “stick and carrot” program for bypassing the Palestinian Authority, presented recently, included an interesting element: setting up an Arabic language news website. The website would be managed by COGAT and would have a 10 million shekel budget (more than a quarter of a million dollars). The unit’s Arabic Facebook page (COGAT posts only in English and Arabic on Facebook, not Hebrew), is more active than ever. When it comes to spreading propaganda, COGAT seems to have no trouble finding the right words in the right language. When information pertaining to life’s most fundamental needs – the very core of COGAT’s work – is needed, COGAT is suddenly tongue-tied.

* A version of this article appeared in Hebrew in Local Call.