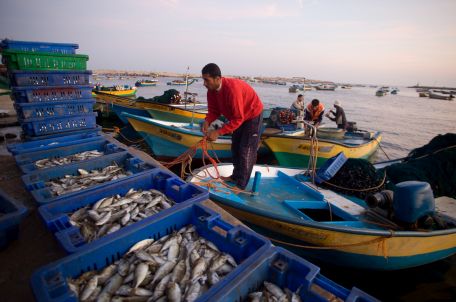 April 30, 2019. This morning, the Coordinator of Government Activities in the Territories (COGAT) announced that the “fishing zone” enforced by Israel in Gaza’s territorial waters has been reduced to a distance of six nautical miles (nm) off Gaza’s shores “until further notice.”

The move was articulated as “a response” to a rocket fired from the north of Gaza towards the sea off the coast of Israel. The Israeli army made a statement to Israeli news outlet Ynet (Hebrew) referring to the person who ordered the firing of the rocket, according to which the actions of one man in Gaza could “ruin everything,” despite the “efforts made by many countries in the world to improve the civilian situation in the Strip.” Israel’s response, the reduction of the fishing zone back to six nm, is a punitive measure impacting the entire fishing sector in Gaza.

On April 1, Israel had implemented a partial expansion of the “fishing zone” it enforces off the Gaza Strip’s shores to 15 nm in an area of the sea opposite the south of the Strip. This was the first time that part of the fishing zone had been extended to this distance since restrictions on access took effect in 1995, following the implementation of the Oslo Accords. However, Israel shrinks and expands Gaza’s fishing zone regularly, often as a punitive measure, causing great uncertainty and insecurity.

Gaza fishermen told Gisha that yesterday night, Israeli navy vessels approached a group of ten boats out at sea and demanded that they retreat towards Gaza’s shores, preventing the fishermen from collecting their nets and their catch of fish, which were lost at sea, leading to significant financial losses for the fishermen.

Deliberately harming a group of civilians in response to an action over which they have no control is cruel and indefensible. It constitutes an illegal measure of collective punishment.