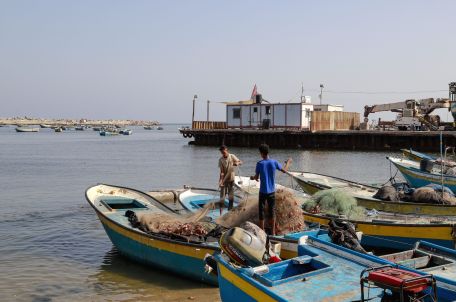 August 7, 2019. In early May 2019, in response to a High Court petition (Hebrew) filed by Gisha, Adalah, and Al Mezan, Israel committed before the court to return some 65 boats it had seized from fishermen in the Gaza Strip. On July 1, Israel returned a large boat belonging to Gaza fisherman Abdel Ma’ati Habil, on behalf of whom the petition had been submitted and whose boat was seized by Israel in September 2016. Habil’s boat sustained considerable damage from live fire during its seizure by the Israeli navy, and during the three years it was held without maintenance, to the point that it could not be returned to the Strip by sea.

Two days later, Israel returned another 20 boats to Gaza by sea. The boat owners reported that their boats were returned without their engines or the equipment that was on board at the time they were seized. In the following weeks, Israel returned 21 more rowboats, 24 motorboats and nine boat engines, some by sea and others by land via Kerem Shalom Crossing. In total, 66 boats have been returned by Israel to Gaza following our petition.

According to Zakariyya Baker, chair of the Gaza Fisherman’s Union, which is part of Gaza’s Farm Labor Union, the boats were returned in poor condition, particularly those returned on land via Kerem Shalom. Baker estimates repairs would cost about 7,000 USD per boat.

There is still some disagreement as to the number of boats and items of equipment still being held by Israel. According to the fishing department in the Ministry of Agriculture in Gaza, Israel is still holding 26 boats, including two large ones, as well as 40 boat engines. The department maintains that the Israeli navy sank three or four boats during attempts to seize them. According to the update submitted to the court by the state, it is only holding six more boats and ten more engines. In its update to the court, the state admits to not having kept a consistent record of the equipment on board the boats at the time of their seizure.

The boats seized by Israel were also carrying additional equipment, the fate of which is also under dispute: The fishing department says only 16 GPS devices seized by Israel have been returned, and that Israel is still holding 40 such devices, as well as 15 devices used by fishermen to detect and locate fish. As for fishing nets that were on board the seized boats, the state notified the court that these were not returned to Gaza “due to sanitary concerns.”

Israel routinely seizes boats from fishermen in Gaza’s territorial waters and holds them for months, even years, without legal authority and in contravention of international law. It has continued to do so even as it was litigating this case, in which it pledged to return the boats. Israel must desist from this punitive, violent and unlawful practice.