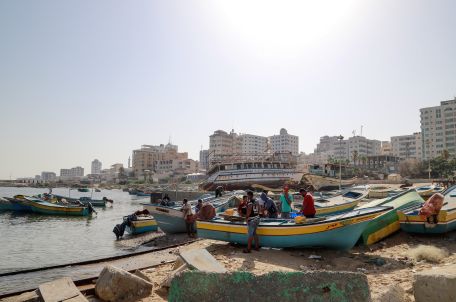 December 19, 2019. The Coordinator of Government Activities in the Territories (COGAT) announced this morning that the fishing zone enforced by Israel off Gaza’s coast would again be reduced from 15 to 10 nautical miles “until further notice.” The measure was openly framed as a response to a rocket fired last night from the Strip toward Israel. The reduction has been imposed to the south of Wadi Gaza, an area of the zone that previously reached up to 15 nautical miles. To the north of Wadi Gaza, Israel limits the fishing zone to a distance of up to six nautical miles.

Zachariya Bakr, head of the Fishermen Union in Gaza, told Gisha that the catch of fish over the last two days was especially big and more profitable for fishermen. The last time Israel reduced the fishing zone was on November 12. On the afternoon of November 14, it cancelled its further restrictions to the zone, and fishing was again permitted up to a distance of 15 nautical miles in a southern section of the zone. Today’s reduction is the 19th change made by Israel to the demarcation of the fishing zone since the beginning of 2019, and the ninth reduction to the zone in that period.

The ongoing restrictions imposed by Israel on access to Gaza’s sea space have severely harmed the fishing sector, once a key sector of the local economy. According to the United Nations, the number of fishermen in Gaza has dropped from around 10,000 in the year 2000, to about 3,700 as of 2013, of which only about 2,000 people engage in fishing regularly.

The firing of rockets towards civilian population centers violates international law and is a war crime. Israel’s further limitation of the fishing zone constitutes illegal collective punishment against the entire fishing sector for actions which no one is claiming are in any way related to fishermen in the Strip. The arbitrary reductions to the zone cause deliberate harm to one of Gaza’s most vulnerable sectors.