March 25, 2012: Israel has denied permission for five hairstylists (three women and two men) to travel from the Gaza Strip. The five requested to exit Gaza to participate in the “Palestinian Beauty and Tradition Spring Fair” in Tulkarem. The District Coordination Office (DCO) responded that “in view of the current political-security situation, residents of the Gaza Strip are not permitted to enter Israel other than in exceptional humanitarian cases, with an emphasis on medical cases”. This answer was given despite the fact that Israel allows merchants to travel from Gaza to the West Bank. In February, for example, 2,146 merchants traveled from Gaza through Erez Crossing.

In a letter to Colonel Khatib Mansour, head of the DCO, Gisha stated that since three of the applicants were independent businesswomen: “approving their application to participate in the fair is particularly important. Everywhere in the world, including the Gaza Strip, fewer opportunities are available to women. Therefore, women must be supported to aspire for economic independence so that they can contribute to the development of their societies.”

Iqbal Kishta, the owner of a beauty salon in Gaza, told Haaretz (Hebrew) that she and colleagues feel discriminated against compared to businessmen. Kishta added that it was important for her and her colleagues to participate in the fair in order to send a message that “Gaza residents aren’t cut off from Palestinian society or from an interest in beauty”.

In addition, the DCO prevented seven female students from Gaza to travel to Al-Quds University in Abu Dis. The students were invited to participate in an international technology competition organized by Microsoft. As with the hairstylists, the DCO denied permission for the students to travel on the basis that they are not an exceptional humanitarian case. 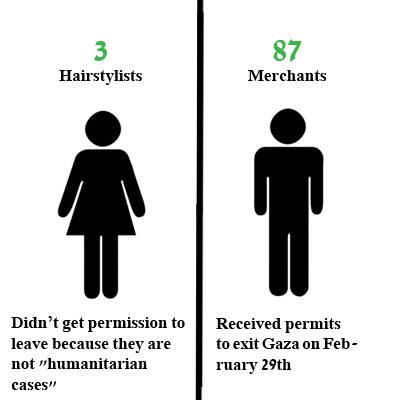