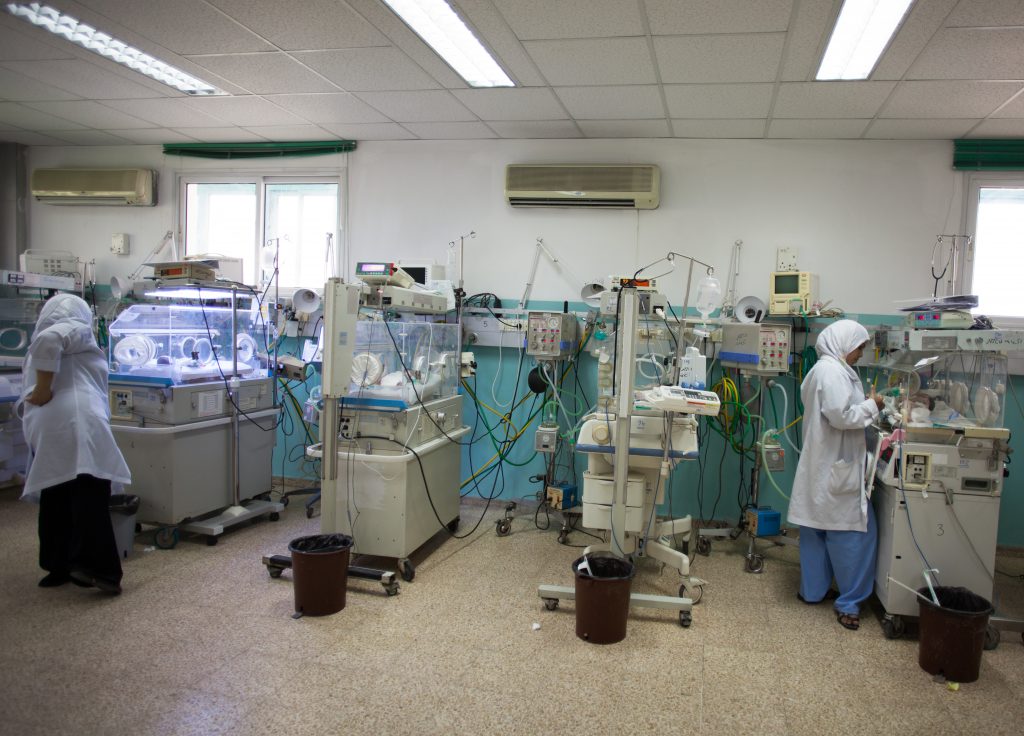 A neonatal ICU in Gaza. Photo by Eman Mohammed

May 4, 2020. Like countless aspects of life in Gaza, the functioning of the healthcare system in the Strip relies in large part on decisions made by Israel. Kerem Shalom Crossing between Gaza and Israel, the Strip’s sole commercial crossing, over which Israel wields exclusive control, is the only route through which essential medical equipment can transit for repair and maintenance outside Gaza. The dependence this creates even in normal times becomes all the more apparent during a pandemic.

One of the importers has tried unsuccessfully for three years to coordinate the shipment of ten items of equipment abroad for repairs, including a device for treating burns, the only one of its kind in Gaza. The company has been repeatedly told that their application must be resubmitted.

To its most recent application, filed in late 2019, the importer received a verbal response, without written record, claiming that Kerem Shalom Crossing was not equipped to process the transit of such devices because it lacked the appropriate scanner to do so. In a letter submitted by Gisha on behalf of the importer, Adv. Moria Friedman Sharir reminded the Israeli authorities that any items already approved for entry into Gaza could be approved for exit via the same process, therefore Israel must find a way to allow the equipment to be shipped through the crossing. The correspondence has since continued, but as of yet, to no avail.

In 2018, another importer submitted an application to ship out a device that controls dosage of anesthetics for repair in Germany. The first two applications submitted by the company went unanswered. When the company filed its third application, it added other equipment parts that require repair, including an item needed to operate an ultrasound machine for children and preterm babies in ICUs.

The importer’s applications were approved in early 2020. When the equipment arrived at Kerem Shalom Crossing, however, Israeli officials refused to allow the devices out on the grounds that they had been transported to the crossing in a private car, rather than a truck, and had arrived late. The importer told Gisha that Israel’s requirement to transport the equipment parts by truck was not only illogical, given they fit easily in the back seat of a car, but also unnecessarily costly (shipment by truck costs about 5,000 shekels/1,420 USD). The importer also received a verbal communication from Israeli authorities, without official record, stating that the crossing lacks the equipment needed for scanning the devices.

When we contacted COGAT on the importer’s behalf, it claimed it was not familiar with the company’s previous applications. Seeing as Palestinians are barred from interacting directly with Israeli authorities (all permit applications are submitted via the Palestinian Civil Affairs Committee in Gaza) and are given no way of following up on their applications, the Israeli military often claims it never received them and there is little recourse.

In recent weeks, as Israel has proudly touted its cooperation with Palestinians in the Occupied Territory to curb the spread of the coronavirus pandemic, it has also continued to delay and effectively deny repairs and maintenance of essential medical equipment in Gaza. This harmful conduct is unlawful and must end immediately to allow Gaza’s healthcare system to function at full capacity.