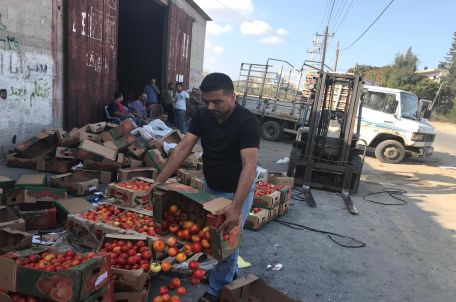 October 18, 2018. Though the exchange of fire between Israel and Gaza has died down, Israel is still blocking virtually all movement to and from Gaza via the crossings it controls, Erez and Kerem Shalom; harming the well-being of people who need to cross and causing immediate and irreversible damage to Gaza’s faltering economy.

Gaza’s economy depends on its access to markets outside the Strip, especially its closest and most natural marketing destinations, Israel and the West Bank. The possibility of selling Gaza-grown produce outside the Strip is central to the livelihoods of farmers in Gaza: the local market is small, its purchasing power declining dramatically as unemployment and poverty rates soar. During the first half of 2018, approximately 80 percent of the goods that exited Gaza consisted of agricultural produce going to the West Bank and Israel.

Yesterday, 15 truckloads of agricultural produce, including tomatoes, cucumbers, eggplant and zucchini, were slated to exit the Strip via Kerem Shalom and for marketing in the West Bank. The Israeli defense minister’s decision to close Gaza’s crossings, implemented as of yesterday morning, stopped the truckloads from exiting Gaza. According to Tahsin Al Saqa, manager of exports in the ministry of agriculture in Gaza, the 400 tons of agricultural produce which Israel blocked from exiting the Strip yesterday and today is worth about 800,000 shekels (roughly 220,000 USD). This morning, faced with the impossibility of selling their produce for profit, farmers resorted to destroying it.

Israel’s closing of Erez Crossing, other than to residents of Gaza returning to the Strip and today some “urgent humanitarian cases,” has caused tens of Gaza patients to miss appointments for critical medical treatment in Israel and the West Bank. The process of coordinating new appointments and obtaining travel permits from Israel can take weeks. Some of the people who are unable to reach their appointments might be too weak to withstand repeating this process, when Israel decides to remove its sanctions at Erez.

The decision to close Gaza’s crossings, the main lifeline for almost two million people, has nothing to do with defending citizens of Israel. It constitutes an act of illegal and immoral collective punishment against the civilian population in the Strip.