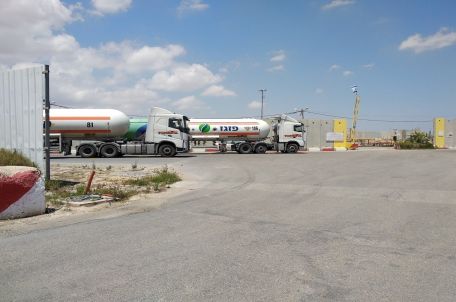 Gas tankers on the Israeli side of Kerem Shalom Crossing, June 2018. Photo by Gisha.

August 2, 2018. Yesterday, Defense Minister Avigdor Lieberman announced another ban on the entry of gasoline, diesel and cooking gas into the Gaza Strip via Kerem Shalom Crossing. The crossing, which is the main entry point for goods into the Gaza Strip, the sole exit point, and the only one connecting Gaza to Israel and thus the West Bank, was closed on 10 July, with the exception of items that Israel defines as “humanitarian”: food, fuel, medicine, livestock and animal feed. A week later, on July 17, fuel and cooking gas were also banned. Last week, on July 24, as critical reserve supplies in the Gaza Strip dwindled, Israel allowed fuel and gas to enter again. Israel is framing these sanctions against Gaza residents as a response to the flaming balloons and kites from the Strip, which are burning fields in Israel.

Collective punishment is illegal and immoral. Moreover, it has been proven over and over again in recent decades, especially since the closure was imposed in 2007, that collective punishment is also not an effective strategy. Often it seems to be nothing more than a muscle that is flexed for domestic political gain.

Meanwhile, the damage caused to the fragile economy of the Gaza Strip, as a result of the ban on all outgoing goods, is enormous. The impact on the economy, which is already coping with 50 percent unemployment and with the weakening purchasing power of the population that lives in perpetual insecurity—in large part due to Israel’s arbitrary and aggressive interventions—could be fatal. Emergency services and infrastructure are already dependent on diesel fuel to run generators, given the chronic and acute electricity shortage on the grid. Power is available at intervals of four hours, followed by 16 to 18 hours of blackouts. Hospitals, households, industry and public services alike struggle to contend with this reality, day in and day out.

In light of the volatile political situation, this cruel game in human life is both confounding and outrageous. Punishing Gaza’s population will not solve dozens of years of conflict or lead to the necessary end to fifty-plus years of occupation. Israel continues to insist on the closure policy, despite its failure, and refuses to offer residents of the region, Palestinians and Israelis alike, a sustainable way forward towards a reality in which there is not only suffering, death and hopelessness.