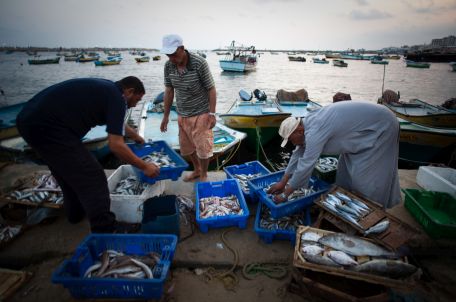 February 28, 2019. On January 2, 2019, for the first time since 2000, Israel expanded a small section in the middle area of Gaza’s “fishing zone” to 12 nautical miles. Fishing in the areas off the northern and southern shores of the Strip is still restricted to a distance of only six nautical miles. The new demarcation of the zone still falls short of the 20 nautical miles agreed upon in the Oslo Accords.

According to the United Nations Office for the Coordination of Humanitarian Affairs (OCHA), even with this “expansion” of a section of the fishing zone, Gaza fishermen are still unable to access most of the fish off Gaza’s shores, given that certain types of sardines, tuna, and mackerel can only be found between 10 and 20 nautical miles off coast.

The Israeli navy marks the boundaries of the fishing zone with buoys and enforces the restrictions by firing warning shots and also shooting live fire directly at boats and fishermen. Fishermen have been killed and injured as a result, and their equipment damaged or destroyed. The Israeli navy also confiscates fishing boats and engines as a means of punishing fishermen deemed to have exceeded the permitted fishing zone, often failing to return the boats to their owners, with severe consequences for fishermen’s livelihoods. Gisha recently submitted a High Court petition (Hebrew) along with Adalah and Al Mezan on behalf of a fisherman whose boat was confiscated by Israel about two and a half years ago.

The ongoing restrictions on access to sea enforced by Israel, as well as restrictions it imposes on entrance of spare parts and equipment into Gaza, have pushed many out of the sector, one of Gaza’s oldest. According to the United Nations, the number of fishermen in Gaza has dropped from nearly 10,000 in the year 2000 to only 3,700 fishermen registered at present; only about 2,000 of the registered fishermen are actively engaged in fishing on a daily basis.