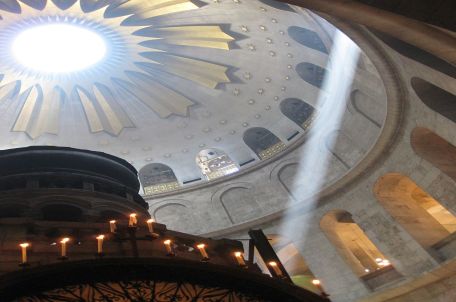 Church of the Holy Sepulcher, 2009. Photo by Tiviet.

April 17, 2019. The Easter holiday will be marked by Christians around the world starting Sunday, April 21. Christians in Gaza, 1,100 people at most, have been waiting to hear whether or not Israel will allow them to exit Gaza to celebrate the holiday with family living outside the Strip and visit the holy sites in the West Bank and Jerusalem.

Yesterday morning, mere days before Easter, the Coordinator of Government Activities in the Territories (COGAT) published the quotas set by Israel for holiday permits to be granted to for Christian Palestinians living under Israel’s control. The quota allocated by COGAT for holiday permits for Gaza residents this Easter is limited to only 200 people over the age of 55, and only for travel abroad; the quotas for West Bank residents are limited to 400 permits for travel abroad, and visits in Israel. This means that Palestinian families separated between Gaza, Israel and the West Bank will not be able to mark the Easter holiday together. It also means that all Christians in Gaza are being denied access to family and to the holy sites in Jerusalem and the West Bank.

This is the first time that we know of that Israel is outright denying access of Gaza Christians to the West Bank and Israel (on Christmas or Easter). It is also a far smaller quota than previous holidays, when COGAT set quotas of at least 500 permits, or more. Such a sweeping restriction cannot be justified by security needs.

Israel’s decision to outright deny movement between Gaza and the West Bank this Easter constitutes a further violation of Palestinians’ fundamental rights to freedom of movement, religious freedom, and family life. The increased restriction on the movement of Palestinian Christians points to further implementation of Israel’s “separation policy:” a policy restricting movement between Gaza and the West Bank which deepens the split between the two parts of the occupied Palestinian territory.