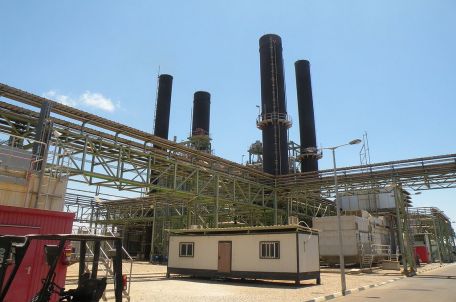 August 26, 2019. This morning Israel announced its decision to limit the transfer of fuel used to generate electricity at the Gaza Strip’s sole power plant. According to reports about the decision reached by Prime Minister and Minister of Defense Benjamin Netanyahu, Israel will only enable the transfer of half the quantity of fuel destined for the plant “until further notice.” The Coordinator of Government Activities in the Territories stated that the decision was made “following the launching of rockets towards Israel, yesterday” and that it would “lead to a significant decline in the supply of electricity to residents of the Strip.”

Gaza suffers from an acute, chronic shortage of electricity, impacting homes, hospitals, factories, and basic civilian infrastructure. Fuel funded through a donation by Qatar has been entering the Strip via Kerem Shalom Crossing since October 2018 , and is used to operate three of the power plant’s four turbines. Prior to the decision to cut the supply by half as of this morning, the power plant was producing about 65 megawatts, providing residents with electricity in cycles of 6-8 consecutive hours followed by at least 8-hour-long outages.

According to the Gaza Electricity Distribution Company, unless Israel reverses its decision, one of the plant’s turbines will stop operating and the power plant will only produce about 40 megawatts. Electricity supply to residents is likely to drop to only four consecutive hours at a time already this evening, or tomorrow morning, at latest.

Israel’s decision to deliberately reduce the supply of a basic humanitarian commodity, knowingly harming the civilian population in Gaza, constitutes illegal collective punishment. The decision to cut fuel supply to Gaza’s power plant has nothing to do with the security of Israeli citizens. Israel must reverse this wrongful measure immediately and renew the full transfer of fuel to the Strip.