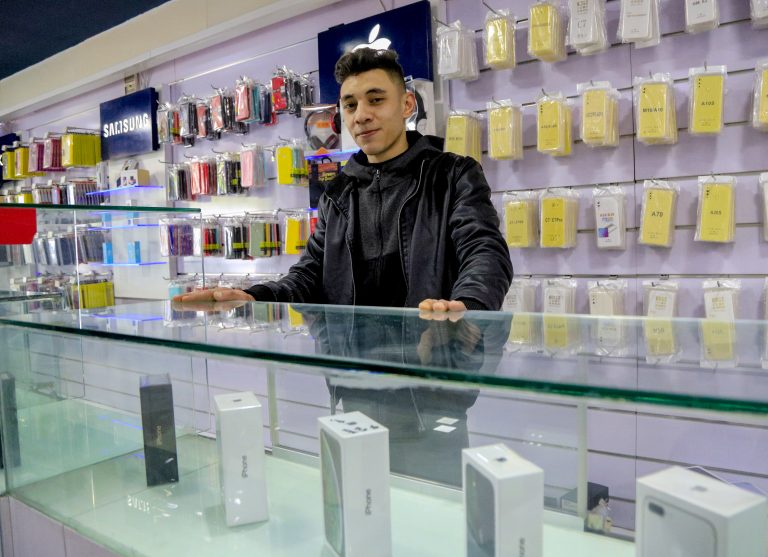 A phone shop in Gaza. Photo by Asmaa Elkhaldi

May 10, 2020. On February 10, Israel imposed a ban on the entry of all “communication equipment” into the Gaza Strip, including items such as laptop computers, internet routers, printers, cellular phones and accessories, cables and chargers. Over the course of April, some requests to bring equipment into Gaza were approved by Israel, but demand still far outstrips supply in the Strip.

In February, the Coordinator of Government Activities in the Territories (COGAT) said the ban was imposed in response to the theft of equipment from storage facilities owned by the Palestinian telecommunications company, Paltel, allegedly carried out by Hamas-affiliated operatives. In a letter to the minister of defense dated April 6, Gisha cautioned that the ban constituted unlawful collective punishment and was especially injurious given the social distancing measures being implemented to address the coronavirus pandemic, under which people are increasingly reliant on remote technologies.

According to Rami Abu Al Oun, chairman of the Palestinian Information Technology Association of Companies, PITA, many companies in Gaza have submitted applications in recent months to request permission and coordinate shipments of communications equipment to Gaza. As of yet, the majority of these applications have received no response from the Israeli authorities.

“Before the ban was imposed, the process of coordinating the entry of this kind of equipment into Gaza took about a week,” Abu Al Oun told Gisha. “Nowadays it’s unclear how and on what basis Israel is deciding which applications to approve. It feels like the decisions are arbitrary and random.” Thus, one application to bring in internet cables was approved, but other applications for the same cables were not; two applications by Gaza companies to coordinate shipments of laptops to Gaza via Kerem Shalom Crossing approved, while others like them are still pending.

Abu Al Oun also emphasizes that numerous companies are still waiting to bring in goods that were approved for entry and ordered before the ban was imposed and have been stored in Israel, at their expense, ever since.

In early April, Gisha reported about the immediate impact of Israel’s decision to ban the entry of all items it defines as “communication equipment” into Gaza and the resultant shortage it had created at a time when people needed it most for working and studying from home. Just like everywhere else in the world, Gaza’s economy, industries and healthcare system depend on regular, uninterrupted access to electronic devices and spare parts. Although it appears that Israel has relaxed the ban, the non-transparent and arbitrary permit regime remains in place, restricting access to essential items. Israel must take action to ensure communications equipment can enter Gaza quickly, efficiently, and in quantities that meet demand.