Before the summer of 2007, when Israel tightened the closure on Gaza, the Strip’s economy largely relied on income from the sale and export of agricultural goods, textiles and furniture. About 85% of the goods grown and made in Gaza were sold in Israel and the West Bank.

Fifteen years of closure have had a debilitating impact on Gaza’s industry: Dozens of factories were shut down, thousands of livelihoods were lost, and under Israel’s sweeping restrictions on travel, business connections between traders in Gaza and their counterparts in Israel and the West Bank were weakened too.

In late 2014, Israel allowed goods from Gaza to exit and be sold in the West Bank for the first time since the closure was tightened. In 2015, a Shmita year, during which, according to Jewish tradition, Jewish farmers must allow the land to lay fallow, Israel permitted the sale of Gaza-grown tomatoes and eggplant in Israel. To this day, Israel still prohibits many types of Gaza-made goods to exit and be marketed outside the Strip, permitting only limited sales of produce, furniture and textiles in Gaza’s closest and most important markets (Israel and the West Bank). Ongoing restrictions enforced by Israel on the entry of equipment and raw materials necessary for farming and production continue to prevent Gaza’s industry from fulfilling its potential.

While the removal of the blanket ban on the exit of goods for sale outside the Strip (starting in late 2014) helped to jumpstart Gaza’s industries to a certain degree, it is not enough to cover the damage already caused by Israeli policy. The numbers speak for themselves: The volume of goods exiting Gaza is still far smaller than it was before the closure; unemployment continues to soar, and entire industrial sectors are hindered by arbitrary, unjustified restrictions.

Israel’s extensive control over the movement of goods and people to and from the Gaza Strip comes with responsibilities, including an obligation to allow economic activity. Israel must end its “economic warfare” against Gaza and allow freedom of movement. 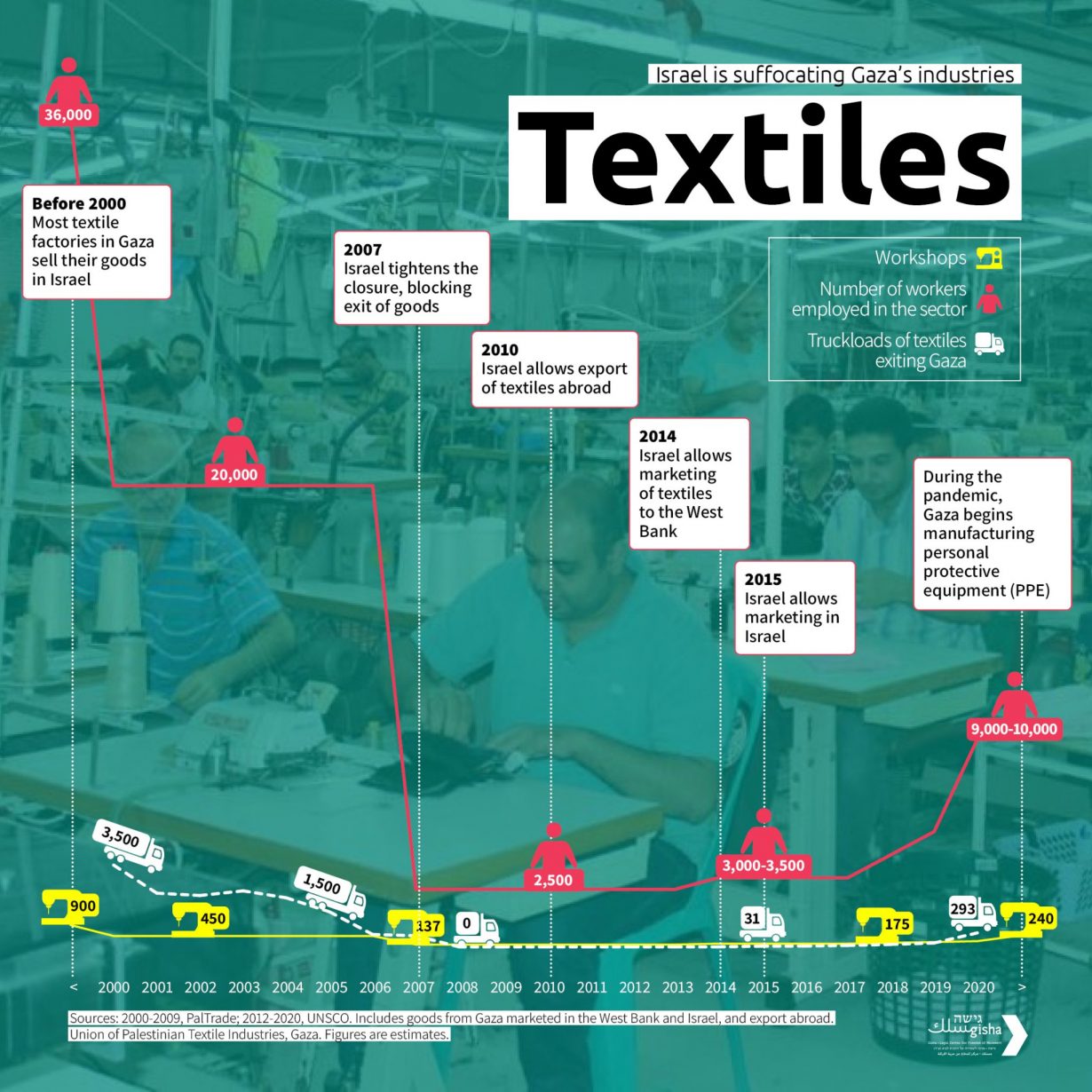 >> In 2000, there were 900 textile workshops in Gaza, providing some 36,000 jobs. Israel’s 2007 ban on exit of Gaza-made textiles to be sold in Israel and the West Bank crushed the sector, impacting thousands of livelihoods. To this day, arbitrary, unjustified restrictions enforced by Israel continue to block its growth. 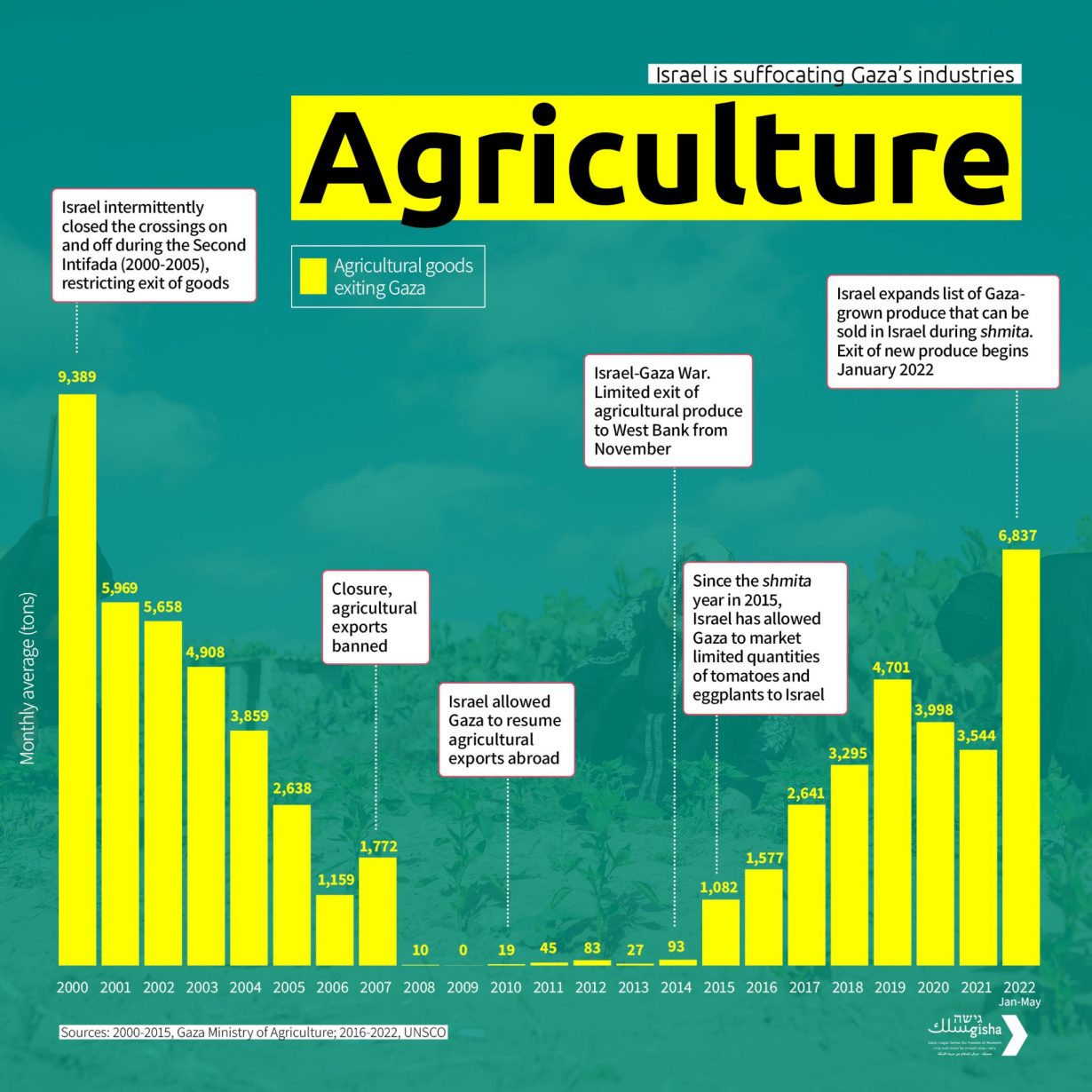 >> From 2007 to 2014, Israel banned exit of Gaza-grown produce to be sold in Israel and the West Bank, historically Gaza’s main markets. Though the sweeping ban was removed, Israeli movement and access restrictions continue to impact the sector, limiting profitability for farmers and traders and undermining Gaza’s economy. 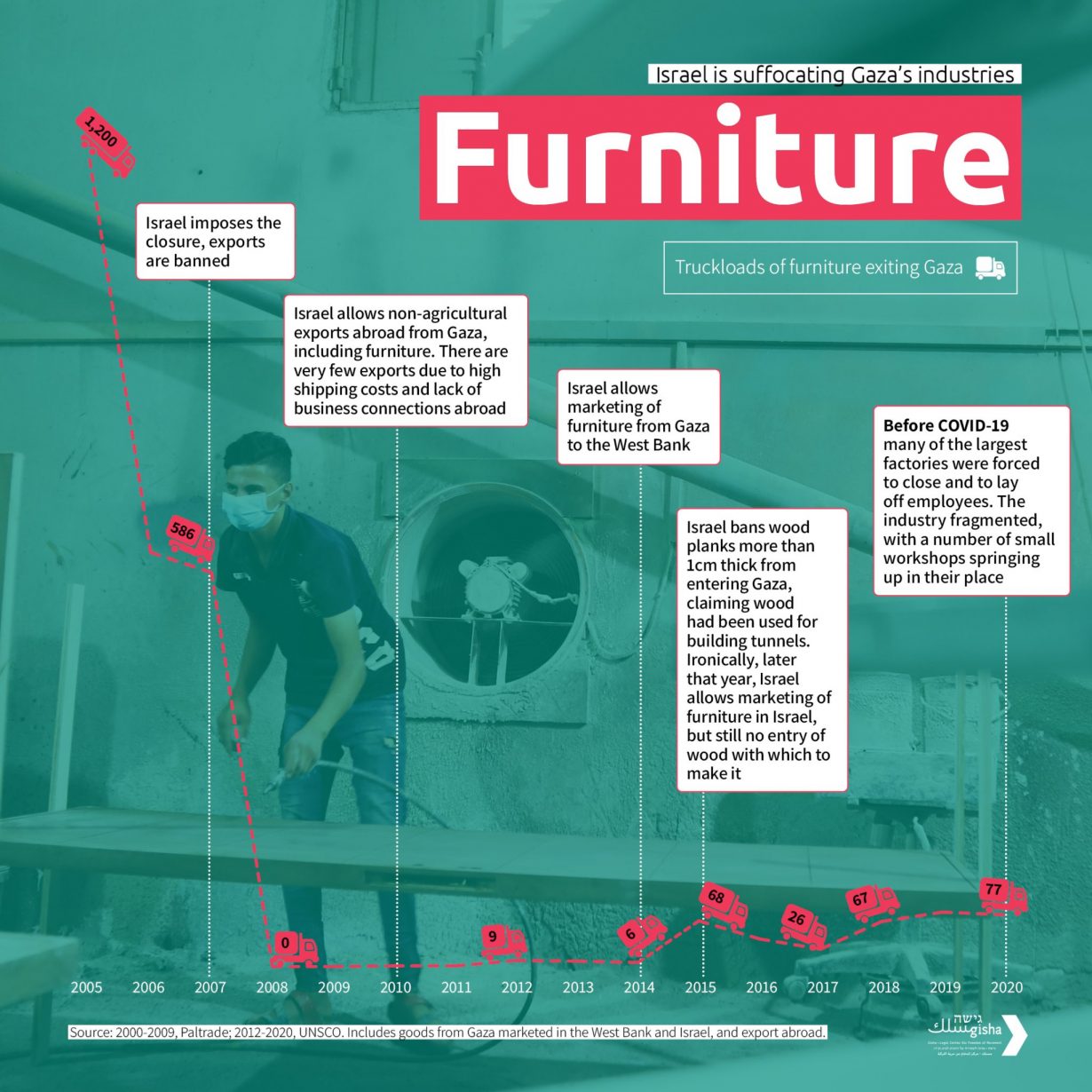 >> Furniture, once a key sector of Gaza’s economy, has also suffered under Israeli restrictions. Though Israel permitted exit of furniture to Israel and the West Bank post-2014, restrictions on the entry of raw materials, as well as travel by traders, continue to needlessly block the sector from meeting its potential.