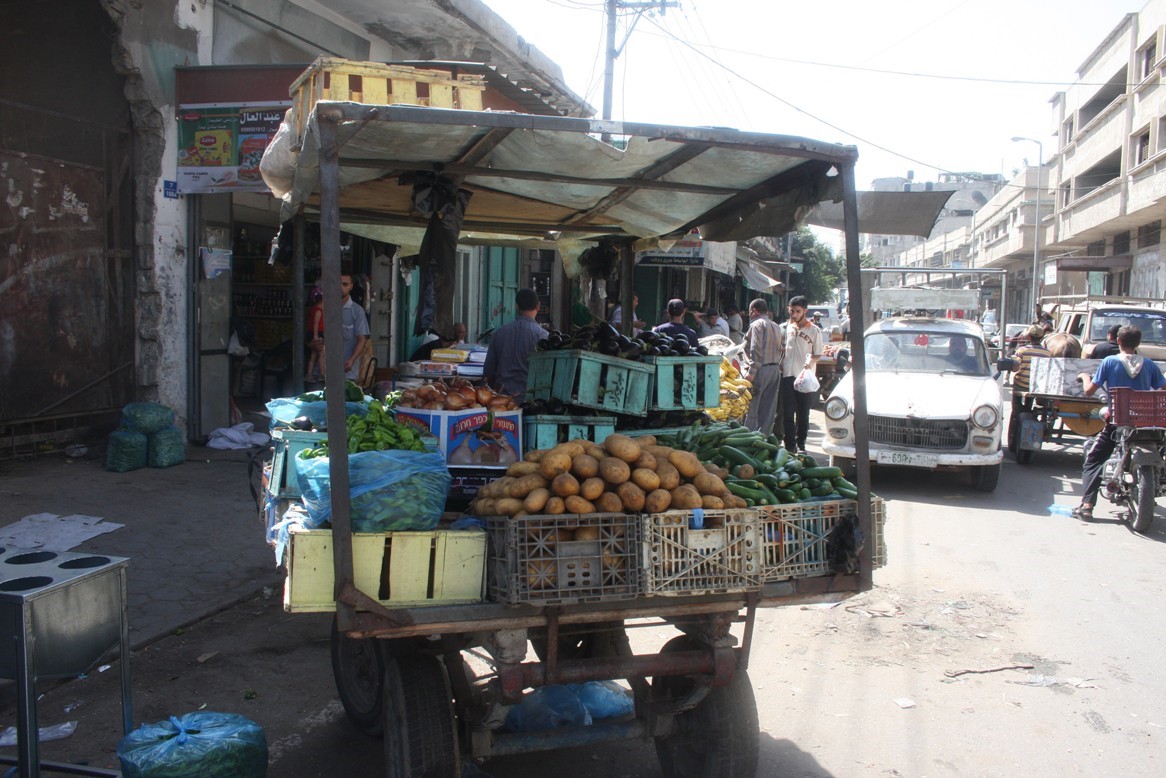 A market in Gaza City.

Decades of movement and access restrictions, including the past 15 years of closure and “economic warfare” by Israel, have left Gaza residents particularly exposed to a global spike in the price of food and basic necessities.

According to the World Bank’s estimation, 59% of Gaza residents, half of whom are children, are living in poverty, and 64% suffer from food insecurity. In April 2022, Oxfam cautioned that wheat reserves in the occupied Palestinian territory could soon run out, and that the price of wheat had risen by more than 25%.

Omar Abu Amra, owner of the Baladna bakery in Deir Al Balah, told Gisha that residents of the Strip are facing “an unprecedented wave of price hikes.” According to Abu Amra, the price of basic foods and raw materials has risen dramatically in recent months: “The price of a sack of flour [50kg], for instance, went up by 47 shekels [about 13.5 USD]. The cost of a cylinder of cooking gas went up 15 shekels [4.3 USD] in two weeks. Even a basic, cheap item like a box of yeast has risen by 23 shekels [6.5 USD]. I don’t know if my bakery can survive this price increase.” Gaza residents have scaled back on buying bread and other baked goods and many families are baking themselves, to save money. “I’m in debt for rent and electricity costs, but I’m no longer making profits. Things are getting tougher by the day,” he told Gisha.

R., a 40-year-old woman living in Gaza, completed her Ph.D. two years ago but has not been able to find work. She says that unemployment has had a direct impact on her mental health. The worse things get, the more helpless she feels. The rising cost of living has impacted her as a mother as well. “Everything is more expensive. One kilogram of chicken used to cost 8-9 shekels [less than 2.5 USD], now it’s up to 13-14 [almost 4 USD].” R. explained that “because cooking gas now costs so much more, many in Gaza have gone back to using electric stovetops. Power only stays on for eight hours at a time so mothers have to cook for their children at night.” 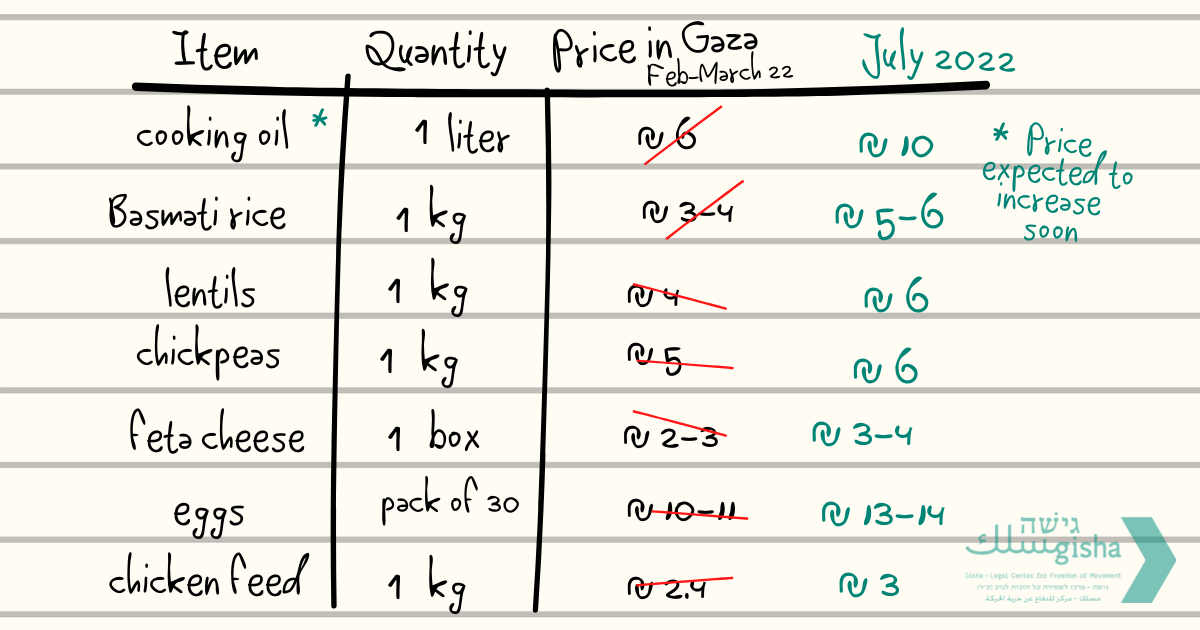 The price hikes in Gaza since early 2022, according to traders in the strip.

The global price increases have particularly severe repercussions for Palestinians in Gaza. Even for those who are employed, income is rarely sufficient to meet basic needs. In the first quarter of 2022, the average monthly salary for private sector employees, who comprise 63% of all employed people in the Strip, was just 676 shekels (about 193 USD).

Siraj al-Tawashi, owner of the Al Tawashi Company, which sells construction materials and stone products, says demand has dropped significantly due to the price increases. “Unemployment is a big problem. There’s no financial security or job stability. No one knows how they’re going to do next month.”

Ahmad Shahin, a 33-year-old married father of four, has been saving up for years to renovate the family’s small kitchen. The money he put away is no longer enough to cover costs. “The price of cement has gone up by at least 100 shekels, steel costs have doubled and scrap metal, left over from reconstruction work, costs more too. Even nails, electrical equipment, plumbing – it’s all gone up,” he said.

Maher Al Tabbaa, director of the Gaza Chamber of Commerce, explains that after decades of Israeli-imposed restrictions on the movement of people and goods to and from the Strip, dire economic conditions in Gaza are being compounded by the global rise in the cost of living resulting in part from the war in Ukraine. According to Tabbaa, this situation has also led to a drop in the availability of basic commodities inside the Strip. “Every trader thinks twice about whether to continue importing goods into Gaza. Unlike suppliers elsewhere, Gaza suppliers know they are at enhanced risk of losing money given their vulnerability to arbitrary restrictions or closing of the crossings by Israel. According to Tabbaa, the Israeli occupation not only plays a key role in Gaza’s economic crisis, it also prevents residents of the Strip from finding ways to cope with the global crisis. “The current state of affairs in Gaza means that many people are buying the minimum they need for their daily consumption.”

Hamed Jad, a journalist and economist from Gaza, also stressed the connection between the lack of political security and the lack of financial security in the Strip. Although Israel recently issued some 10,000 permits for Gaza residents, allowing them to work in Israel, the positive effect this development might have had on the local economy has been blunted by inconsistent processing of permit applications. Even the few people who hold valid permits are concerned that Israel could impose a sudden “security ban” preventing them from accessing employment in the future, and deterring them from spending their precious earned income in the local economy.