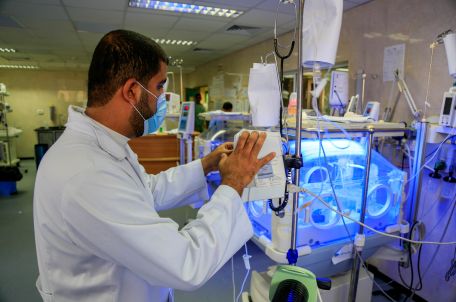 Hospital in Gaza. Photo by Gisha

The dire state of Gaza’s health system, further exacerbated by the ongoing electricity crisis and shortage of fuel used to operate hospital generators, means that certain types of medical treatment cannot be obtained in the Strip. As a rule, Israel only allows entry into its territory for the purpose of transit for medical treatment, if the treatment is “life-saving” or “life-altering,” and on the condition that it is not available in the Strip.

According to a directive introduced by Israel in 2017, Israeli authorities have 23 business days to process permit applications submitted by patients from the Strip in order to reach medical treatment, that is, no less than a month, regardless of the patient’s appointment or condition. WHO data from 2018 indicates that this timeframe, if it is met at all, does not meet the needs of at least 31 percent of Gaza patients seeking treatment that can only be reached outside the Strip.

Permits for travel for medical purposes are often used by Israel as leverage over Gaza’s civilian population: In 2018, Israel denied several hundreds of applications filed by Palestinians from Gaza for medical treatment on the grounds that the permit applicants were allegedly “first-degree relatives of Hamas operatives.” Last August, following a petition filed by Gisha challenging this policy, the High Court ruled that the Israeli Security Cabinet’s decision to deny Gaza patients access to medical treatment as a means of leverage over Hamas was not only ineffective, but also unlawful.