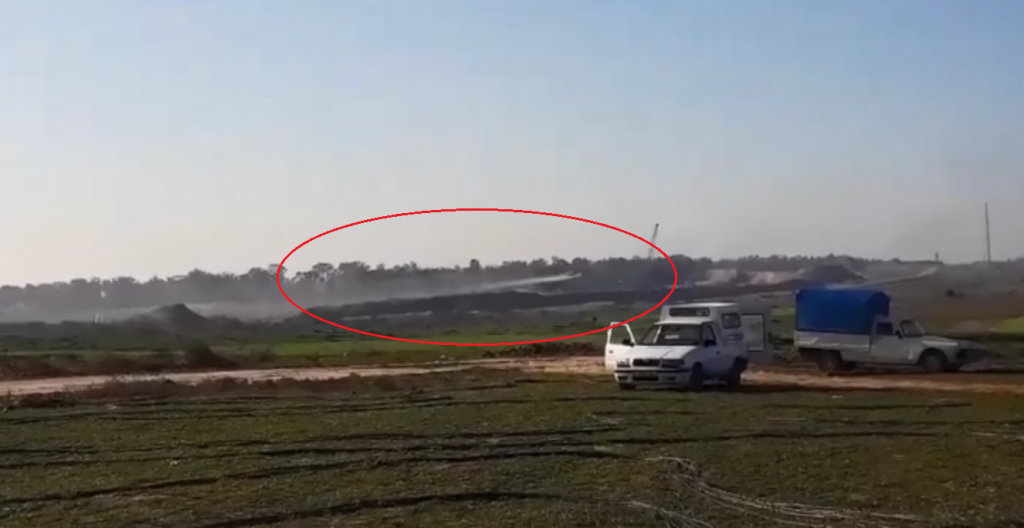 Aerial spraying conducted in January 2020, documented by farmers in the area.

May 7, 2020. According to statistics released by the Palestinian Ministry of Agriculture in Gaza, aerial herbicide spraying conducted by Israel in early April near the Gaza perimeter fence damaged 588 dunams (145 acres) of farmland to the east and north of the Gaza District, harming the livelihoods of 93 farmers in the area.

Mohammed Al Arir, 38, and his brothers, a family of second-generation farmers, lease two stretches of farmland in Gaza; 35 dunams (about 8.6 acres) located east of Gaza City, reaching up to 100 meters (328 feet) from the fence with Israel, and 25 dunams (6 acres) reaching between 400 and 600 meters from the fence. The aerial spraying destroyed most of their crops, which include eggplant, peppers, melons and watermelons.

Ten of the brothers’ employees, including relatives and neighbors, have also suffered heavy financial losses as they rely on the sale of these crops for income. “My workers and I were banking on these crops,” Mohammed Al Arir said. “We hoped we would be able to provide our families’ essential needs during Ramadan, but instead, I’m left with loans I have no way of repaying. I don’t know how I’ll manage and who’s going to compensate me.” Al Arir says he invested 3,600 ILS (more than 1,020 USD) on his melon crop alone, including on disinfectants and fertilizers, which he has now lost, on top of the projected profits.

“If I had at least known there was going to be spraying, I would have made sure to cover the crops to protect them in advance,” explains Al Arir. “We’re in a state of slow death. There’s no one to monitor or protect us from Israeli oppression and violations. We wake up every day fearing our crops will be damaged.”

Omar Abu Khusa grows okra and watermelons in fields east of Khan Yunis. His attempted coping strategy for the ongoing threat of another round of aerial spraying is to wake up earlier than usual each morning so he has enough time to cover the crops if he sees or hears planes overhead. The crops have to be exposed to sunlight, and bees must be allowed to pollinate, so Abu Khusa has to be on constant alert to cover the crops if needed. “I’ve had it,” he says in despair.

Riyad Al Naser, a veteran farmer who cultivates 20 dunams of land in the center of the Strip, says that the frequent losses caused by Israel’s herbicide spraying has turned his livelihood into a source of disappointment and hopelessness. “I’m calling on Israel to stop spraying and stop toying with us,” he told Gisha’s field coordinator.

Planes commissioned by the Israeli Ministry of Defense also conducted spraying over the course of three consecutive days in mid-January, when farmlands east of Al Bureij, Gaza District, Beit Hanoun, Deir Al Balah, Khan Yunis and the south of Wadi Al Salqa were hit. In January, the Palestinian Ministry of Agriculture estimated at least 2,000 dunams (495 acres) were damaged as a result of the concentrated spraying, leading to financial loss of more than 1,250,000 USD as a result. In a press conference held in early February, the Ministry of Agriculture declared the areas harmed by the spraying “disaster zones,” calling on Israel to compensate farmers.

Israel must end the destructive and unlawful practice of aerial herbicide spraying. At these times, it is more important than ever to allow Gaza’s economy to function to the greatest possible extent and refrain from actions that hinder economic activity and put the livelihoods of entire communities at risk.