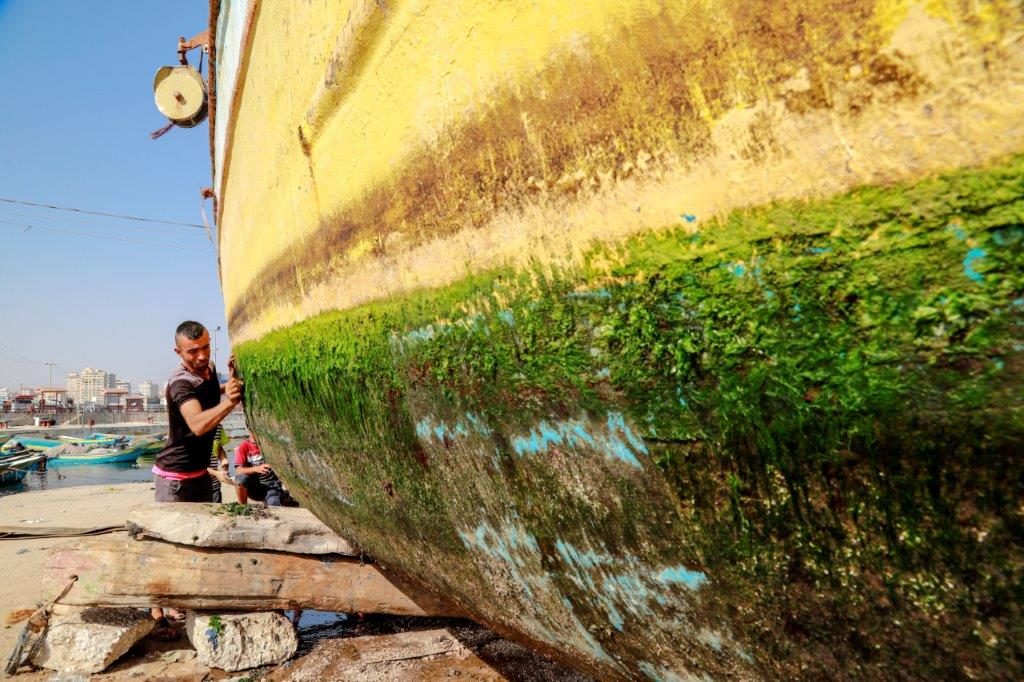 April 2, 2020. Yesterday, Gisha sent an urgent letter to Israel’s defense minister and the Coordinator of Government Activities in the Territories (COGAT) demanding they remove restrictions that hinder economic activity and production of food. In the fishing sector, we noted examples of restrictions on the entry into Gaza of items that Israel defines as “dual-use,” which impair the ability of fisherman to engage in their trade: boat engines and spare parts, sealant, and fiberglass products used to repair boats. Years of closure and access restrictions in Gaza’s sea space, often enforced violently, with measures such as shooting at fishing boats, and detaining or arresting fishermen, have severely debilitated what was historically a major economic sector in the Strip.

With the outbreak of the COVID-19 pandemic, lifting restrictions on fishermen’s access to the items they need to in order to make a living and support their families is all the more crucial – not only for fishermen and their immediate families, but also for Gaza’s economy and the food security of the general population in the Strip.

Following a lengthy legal battle by Gisha along with fellow human rights organizations Adalah and Al Mezan Center for Human Rights in Gaza, in late 2019 Israel returned a total of 69 fishing boats it had previously seized from Gaza fishermen and which had been held for months, even years, without legal authority and in defiance of international law. The boats were returned in poor condition and missing much of the equipment that was on board at the time they were seized. Palestinian officials from the fishing department in the Ministry of Agriculture in Gaza said dozens of boat engines and GPS devices, as well as 15 devices used to detect fish, were not returned to the Strip. Due to the shortage in items needed to repair the boats, most of the returned boats have only been partially repaired; 16 of them were not repaired at all. This results directly in higher unemployment rates in the fishing sector.

Despite the acute need and repeated requests from fishermen, Israel frequently fails to respond to requests by importers and aid organizations in Gaza to coordinate the entrance of the necessary items. An application by the Ma’an cooperative to bring in fiberglass and 100 boat engines, for instance, never received a response from Israeli authorities. A request by a well-known humanitarian organization to bring in fiberglass also remains unanswered, while the materials themselves are stored in Israel at the expense of the organization. Zakariyya Baker, head of the Fisherman’s Union in Gaza, told Gisha that there is a shortage of 300 boat engines in the sector, and that the engines are not available anywhere in the Strip. Last month, officials in the Strip resubmitted applications to coordinate entry of fishing equipment, but to no avail.

Nafed Al Habil, a Gaza fisherman, says one of his larger boats, which can provide work for 20 people, is currently out of commission as a result of the long delay in the entry of spare parts ordered by an importer of fishing equipment. The importer told Gisha he has been waiting for Israel’s response to his request to bring in cables and spare parts for boats since last October. Given the dire economic situation in Gaza, which is only expected to deteriorate due to the COVID-19 crisis, many of Al Habil’s employees have had to take out loans to survive.

The sardine season is just around the corner, and local demand for fish is likely to rise during the upcoming month of Ramadan. Israel must act now to allow Gaza’s fishing sector to grow, employ more people, and be able to provide more food to Gaza’s residents. Gisha calls on Israel to approve without delay the entry of the items that are critical for the proper functioning of the fishing sector, even those that it defines as “dual-use,” and to respect Gaza residents’ fundamental rights, including the right to livelihood.