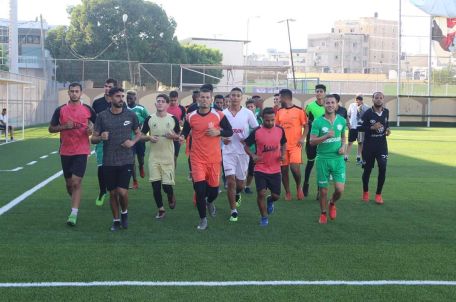 September 18, 2019. Following submission of our petition, Israel updates that it will allow 11 members of the team out, but only five of them players.

September 18, 2019. Khadamat Rafah, the Gaza Strip football (soccer) cup holder, was scheduled to play a cup final rematch on July 3, against the Balata Refugee Camp club, from Nablus in the West Bank. The two clubs faced off on June 30 in Gaza, with the match ending in a 1:1 draw. Israel allowed the West Bank team to enter Gaza via Erez Crossing.

Ahead of the rematch, the Rafah club submitted exit applications for its 22 players, and 13 members of the coaching team and executives. Three days before the scheduled match, the club’s spokesperson was told that 31 of the 35 applications had been denied on security grounds. Only four applications were approved, of which just one of them was of a player. Two of the individuals denied exit were told they would receive a final response after a security interview at Erez Crossing.

The match was rescheduled, with a new date of September 25. New applications with supporting documents were submitted to the Coordination of Government Activities in the Territories (COGAT) on August 21.

On September 15, after no answer had been given, Gisha filed a petition (Hebrew) to the district court in Jerusalem demanding that it instruct COGAT to respond favorably to the club’s application to travel to the West Bank for the match. The petition notes that any further delay would jeopardize the winning club’s entry into the Asian Champions League. The petition states that “the conduct of the respondents infringes upon the petitioners’ constitutional rights to freedom of movement, freedom of occupation and access to professional opportunities… Club players hope to fulfill their professional potential and participate in the final game of the Palestinian league, in the hopes of winning the title. Given the reality in which Gaza residents are separated from West Bank residents and football is played in two separate leagues, this is their only way of winning the title.”

The match between Rafah and Balata is part of a FIFA-recognized tournament, which has been held every year since 2015. Because of Israel’s separation policy, Palestinian league and cup games are held in two separate tracks in the Gaza Strip and in the West Bank, with the cup final held between the Gaza Strip cup holder and the West Bank cup holder. The club that wins the two-match playoff represents Palestine in the Asian Champions League.

The document listing the criteria for travel via Israel to the West Bank or abroad, including for sporting events such as this one, does provide for travel by national or local sports team to participate in Palestinian Authority-sponsored events.

On Monday evening, COGAT responded to the application for permits, stating that 11 members of the team were approved, but among them only five players. The remaining 24 petitioners were denied on unspecified “security grounds.”

This response, denying 24 team members, like Israel’s initial response denying 31 members, is sweeping, unreasonable and disproportionate. Gisha submitted an updated request to the court asking it to instruct COGAT to grant access to the remaining team members.

The state’s response is due September 22 and a hearing is set for September 23.

The petition and the alternative date for the important match present the authorities with an opportunity to reconsider the application fairly and honestly and approve it.