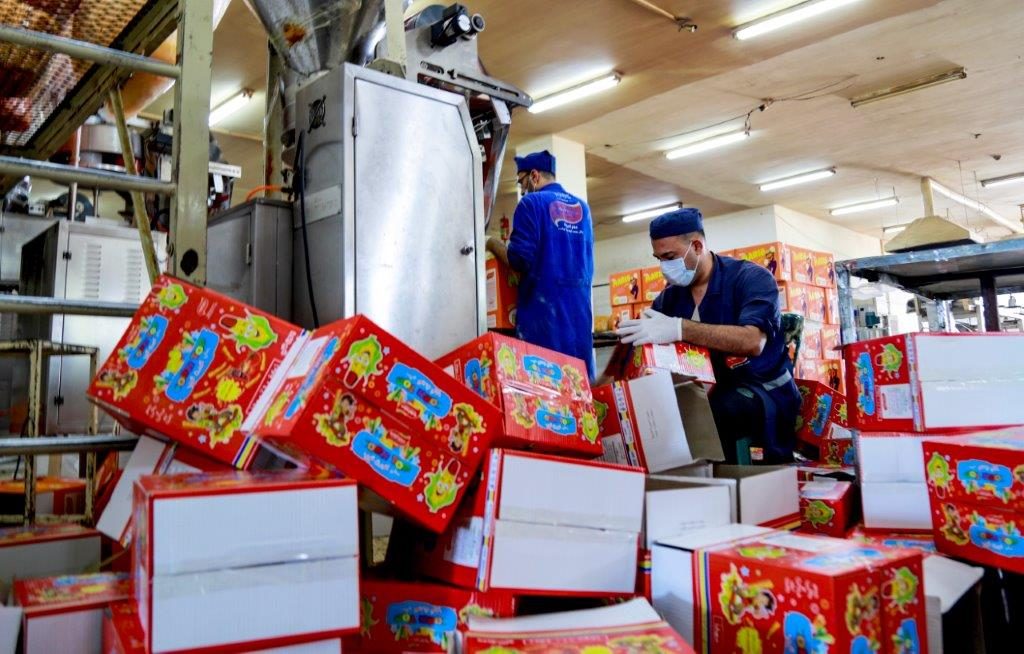 A sweet and snack factory in Gaza. Photo by Gisha

April 1, 2020. Today, Gisha Executive Director Tania Hary and Board Chair Professor Kenneth Man sent an urgent letter to Israel’s Defense Minister Naftali Bennett and the Coordinator of Government Activities in the Territories (COGAT) Kamil Abu Rukun, demanding they take immediate action to protect food security and promote economic activity in the Strip as the COVID-19 pandemic continues to spread. The two were asked to remove ongoing restrictions imposed by Israel on the entry of so-called “dual-use” equipment and materials for which there is an acute need in Gaza’s farming and fishing sectors, and to allow the exit of Gaza-made food products for sale in the West Bank.

While countries across the globe grapple with the severe economic repercussions of measures taken to curb the spread of the COVID-19 pandemic, Gaza’s economy has, for years, teetered on the brink of collapse, primarily as a result of the closure imposed by Israel since 2007. It is crucial, now more than ever, that Israel remove restrictions hindering Gaza’s economy, focusing especially on the sectors that provide food for the local civilian population and that could provide a source of income for thousands of people: The fishing and farming sectors, and the processed foods industry.

The farming sector is a critical source of both employment and food supply in the Strip. For years, farmers in Gaza have sought to coordinate the entry of fertilizers and agricultural disinfectants that could increase their yield by as much as 25 percent, improve the quality of crops, extend their shelf life, and boost profitability. Israel prevents these materials from entering Gaza in the required quantities. In July 2019, media reports (Hebrew) suggested that Israel had decided to relax restrictions on the entry into Gaza of items it defines as “dual-use,” including the much-needed fertilizers and disinfectants for farming yet, Israel continues to deny Gaza access to these essential materials.

The fishing sector, another major source of livelihoods and supplier of food for Gaza’s residents, has suffered for years under limitations Israel enforces in Gaza’s sea space, as well as restrictions it imposes on the entry of “dual-use” equipment and materials needed for repair and maintenance of fishing boats, which have left many boats out of commission. According to Gaza’s Fishermen’s Union, Israeli authorities are well aware of the acute need for fiberglass, steel cables, boat engines and spare parts. Still, applications made by suppliers to coordinate the entry of these products have been delayed or received no response.

Before the closure was imposed, 80 percent of the processed foods produced in Gaza were sold outside the Strip, mostly in the West Bank and Israel. The Food Industry Association and business owners from the sector have long emphasized the need to market their products in the West Bank. For more than two years, Gisha has campaigned for Israel to allow the sale of processed foods outside Gaza. However, despite assurances made by Israeli authorities to resolve this issue in response to a High Court petition submitted by Gisha, no progress has been made. Professional experts in the Strip believe that restoring the possibility of marketing products in the West Bank would increase employment and mitigate the impact of the emergent economic crisis.

Given the immediate danger to human life in Gaza, and Israel’s ongoing control over countless aspects of life in the Strip, Israel must act without delay to remove the closure and allow as much economic activity as possible in the Strip.

“Israel has a standing obligation to protect the health of Gaza’s residents, and all the more so in light of the corona pandemic and the discovery of first cases in Gaza,” wrote Hary and Mann in the letter. “As such, Israel must take action to protect food security and prevent the collapse of the local economy. It must do so by lifting ongoing restrictions that are unnecessary even in ordinary times.”

To read the full letter in English, see here, or Hebrew, see here.