In the aftermath of the May 2021 escalation, Gisha staff participated in several public events and engagements highlighting Israel’s obligation to allow access for Gaza, particularly at a time of such dire need. On May 20, Gisha Executive Director Tania Hary participated in a webinar hosted by Breaking the Silence, ‘This is how we fight in Gaza,’ attended by over 1,000 participants. In her introduction, Hary provided background on Gaza and the obligations that flow under Israeli and international law toward residents of the Strip from its ongoing occupation.

Gisha’s Gaza-based field coordinator, Mohammed Azaiza, participated in a briefing with Yachad UK, with around 200 participants, alongside panelists from Jerusalem and Netiv Ha’asara, an Israeli community on the Gaza border. Azaiza spoke about the reality on the ground during the eleven-day escalation and in its aftermath.

On May 24, Gisha’s executive director participated in a panel organized by Refugees International alongside Elizabeth Campbell, Director of the UNRWA Washington DC office and others. On the panel, Hary highlighted that “the situation in Gaza cannot be divorced from what’s happening in the West Bank and East Jerusalem (28:12),” and that, “Israel is able to control demographically the way that Palestinians exist in the space of this region…where people can live, and where they can have a family (28:19).”

On June 2, Hary participated in a webinar organized by Churches for Middle East Peace, alongside partners from HaMoked and Rabbis for Human Rights. She questioned the use of the term ‘conflict.’ She highlighted, “we’re not talking about equal sides to a conflict. We’re not talking about two states…about equal powers. We are talking about a people who are under occupation (36:00).” She further expounded on the narrative that there’s an “us vs. them” mentality, and that “none of us can be safe until we’re all safe (37:18).”

On June 15, Hary also participated in a webinar organized by the Foundation for Middle East Peace, discussing the Gaza Reconstruction Mechanism (GRM), alongside Issam Younis of Al Mezan. “Even outside of the hostilities and when Gaza disappears from your front pages, there’s…ongoing warfare on the Strip, whether that is physical, in terms of smaller military operations…but even things like bureaucratic violence…it’s really been a deliberate decision on Israel’s part to push Gaza to the brink (20:15),” Hary commented. She added, “Israel doesn’t see itself as owing obligations to Gaza, particularly since the 2005 disengagement. It imposes collective punishment, it blocks access very sweepingly, and it does that with total impunity (22:13).”

On June 16, Beth Oppenheim, Gisha’s director of international relations presented in a webinar titled “From Dialogue to Accountability: The Struggle to Implement Rights in Israel/Palestine” hosted by Harvard’s FXB Center for Health & Human Rights. She pointed out that the recent escalation with Gaza cannot be divorced from the 14-year-long suffocating closure on Gaza.

Gisha Public Advocacy Coordinator Noa Galili also appeared on Hebrew-language podcasts hosted by Hadash and another by the NGO Standing Together. She reminded Israeli audiences that any path forward must allow for freedom of movement and access between the West Bank and Gaza. Galili also briefed Ministers and Members of Knesset, in addition to local organizations, trade groups, and other stakeholders.

Gisha staff have also delivered a number of private briefings, including for members of Congress and their aides, members of the UK and European Union parliaments, other EU institutions in Brussels, diplomats in local embassies and representative offices, as well as journalists. 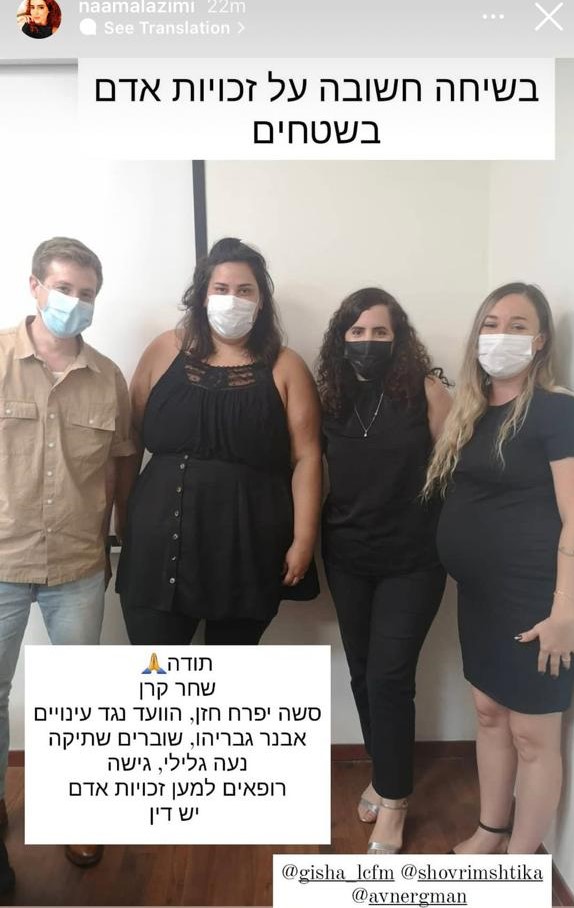