On May 13, 2021, Israel bombed the 14-floor Al Shorouk tower, which housed media headquarters, private companies, and shops. Within seconds, hundreds of business owners and employees, already struggling under decades of movement restrictions and closure that block economic development, joined the ranks of Gaza’s unemployed. Like thousands of others in Gaza who lost their homes or businesses during the attack, their ability to rebuild is hindered by ongoing restrictions imposed by Israel on the entry of construction materials into the Strip. The Al Shorouk tower is one of five high-rise buildings in Al Rimal flattened by Israel during the recent military operation. Additional buildings in the neighbourhood were badly damaged.

The family-owned shoe and handbag store Al Zaituna was opened on the first floor of Al Shorouk tower just ten days before it was bombed. “I had organized a big party for the store opening, inviting relatives, neighbors, and friends. I was happy,” says business owner Shadi Al Zaituna, a married 23-year-old who recently became a father. “We bought the store three months ago, investing all the money my brother, my father and I had saved up over the years. We renovated and remodeled, replaced the flooring, re-did the walls. We worked on the place for three months, and didn’t get a chance to enjoy it. We put 30,000 USD into setting it up. Israel bombed it, and now there’s nothing left. All our merchandise was buried in the debris.”

Pictured, Shadi Al Zaituna next to his store in the Al Rimal neighborhood, bombed by Israel in May. Photo by Mohammed Azaiza.

“The Al Rimal neighborhood was Gaza’s life and soul,” Al Zaituna adds in pain. “I used to imagine my baby boy growing up and standing by my side at the shop. But they bombed everything, they bombed my dreams, my soul. I don’t know what I’ve done in my life to have all my dreams destroyed like this.”

Across the street from Al Shorouk tower was a children’s store called Lavender, one of the largest shops in the Strip. Spanning 600 square meters, it used to employ 14 staff before sustaining severe damage during the airstike on Al Shorouk. “I was getting ready for the iftar meal at home. Suddenly I got a phone call from the tower’s security guard,” says Bilal Mansour, a 30-year-old father of two who has worked in the store for five years. “I couldn’t believe what I was hearing. I’d never imagined the Al Shorouk building would be bombed. It was a nightmare. I dropped everything and ran out of the house like a madman. I didn’t think about how I would get there; the bombs kept coming from everywhere. I stopped hearing the sound of the missiles, looking frantically for a car to get to the store. When I got there, the first missile had already hit the building. I couldn’t see anything, there was dust everywhere, and then, I saw – the whole tower had fallen.” 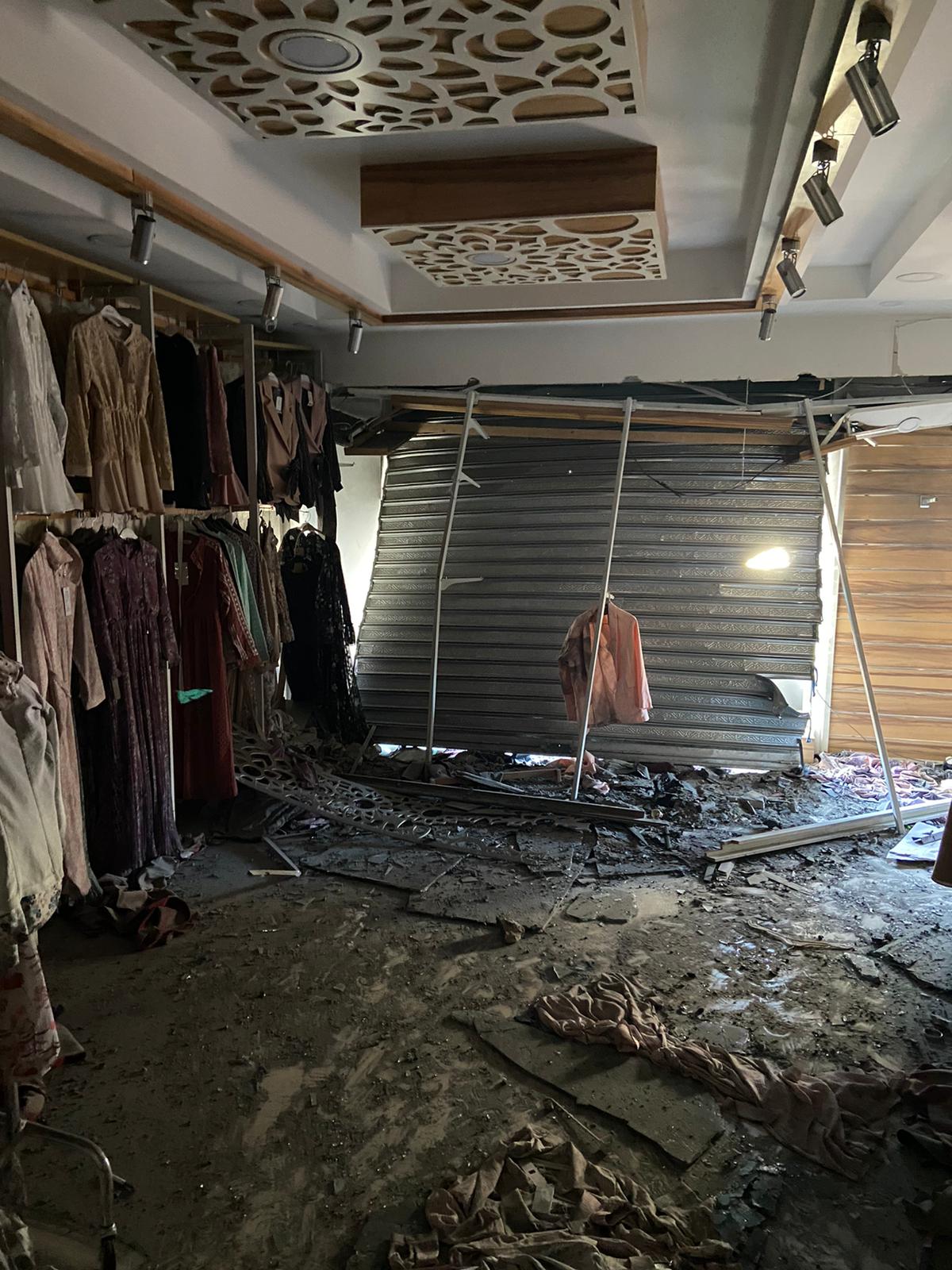 Lavender after the airstrike on Al Shorouk tower. Photo by Mohammed Azaiza.

Lavender was badly damaged. “I couldn’t hold it together,” Mansour says, “I broke down and cried. I walked through the rubble saying – this is where we’d sit and eat, that’s where we’d talk to the customers, there’s where my office was. Lavender is like a second home to me. All my memories vanished with it.”

The staff, including Mansour, still show up at the store every day, unable to process a reality in which Lavender no longer exists. They have no work and no way to provide for their families. “I don’t know what I can do,” says Mansour. “The owner is in a deep, serious crisis. We had ordered a lot of merchandise ahead of the holiday, which is usually the peak of sales. Now everything is gone, and nothing can be returned.”

“What happened at al-Rimal is a war crime. This neighborhood is Gaza’s commercial heart,” Mansour says. “We will rebuild the store, open it and reinstate all the staff. We want our lives back.”