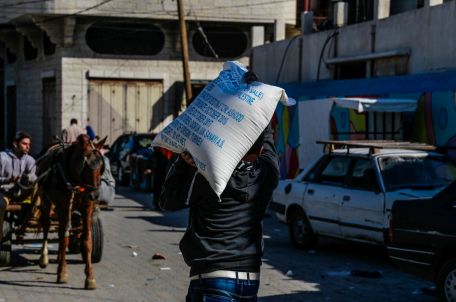 A man carrying a sack of grain, Gaza. Photo by Gisha.

January 22, 2018. A general strike is being held in the Gaza Strip today. The private sector, including businesses, industry, agriculture and construction, is striking in protest against continuous economic decline and worsening living conditions endured by residents of the Strip.

A notice announcing the protest is addressed to the chairman of the Palestinian Authority, the president of Egypt, and the international community, including leaders of Muslim countries. The statement decries soaring unemployment rates, particularly among the young and educated; rising poverty rates and shortages in cash flow, and; persecution of individuals who are unable to pay back their debts. The charge inferred is that the closure imposed by Israel and three destructive rounds of hostilities have caused severe damage to Gaza’s economic infrastructure and its chances of recovery. The state of affairs is further exacerbated by the continued closure of Rafah Crossing, delays to the implementation of Palestinian reconciliation, and the international community’s restrained approach.

The demands presented by representatives of Gaza’s private sector include the opening of Rafah Crossing; mounting pressure on Israel to abandon its control mechanism for entry of construction materials put in place after the summer of 2014 (the Gaza Reconstruction Mechanism), and end suffocating restrictions limiting movement through the Kerem Shalom and Erez crossings; the repeal of cutbacks to Palestinian Authority employees’ salaries, and the taxation of the entire population of Gaza which was recently reintroduced. The statement calls for the development of a comprehensive strategy to salvage Gaza’s economy.

Last week, Gisha published its summary of 2017, a round-up of ten recent measures imposed by Israel further limiting movement of people via Erez Crossing, indicating that despite countless declarations by senior Israeli officials recognizing that regional stability is inherently linked to substantial improvements in living conditions in the Strip, the trend on the ground is clear; the closure on Gaza is tightening dramatically, with severe implications for Gaza’s civilian population and the extreme adversities they face. Gisha recalls that access to family, livelihoods and health care depend on freedom of movement, a fundamental human right guaranteed by international law.