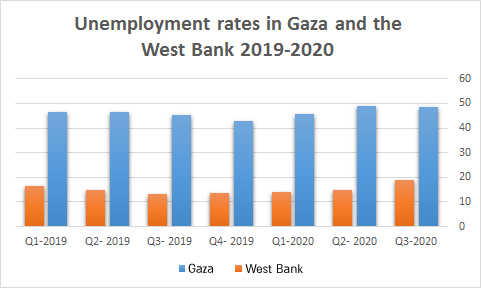 November 18, 2020. According to figures released by the Palestinian Central Bureau of Statistics (PCBS), Gaza’s unemployment rate increased by 3.5% in the third quarter of 2020 compared to the same quarter last year, and now stands at 48.6%. This is a slight drop of 0.5% compared to the second quarter of 2020, apparently due to the lifting of restrictions imposed within the Strip by local authorities in order to curb the spread of the coronavirus.

The rate of participation in Gaza’s workforce for people above the age of 15 was 35.4%, a 3% increase from the previous quarter. The number of women employed in Gaza increased from a total of 28,900 in the second quarter to 30,600 in the third. However, the proportion of women in Gaza who participate in the workforce now stands at 14.5%, a roughly 18% drop compared to the same quarter in 2019, and a dramatic 40% decrease compared to the third quarter of 2018.

Israel’s decision to continue denying almost all travel via Erez Crossing, including by traders and laborers, at a time when Gaza is most vulnerable to the impact of the global financial crisis spurred by the pandemic, is further straining Gaza’s fragile economy and undermining already dire conditions for its residents.