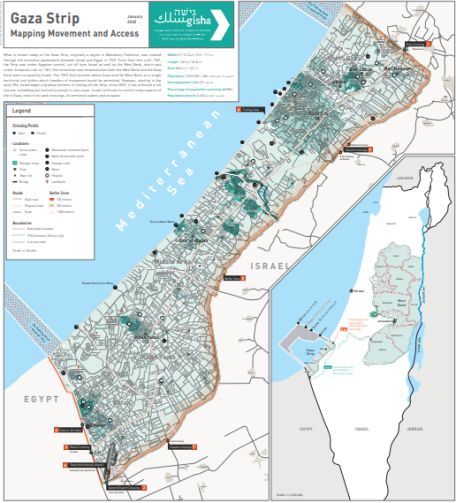 January 9, 2020. What is known today as the Gaza Strip, originally a region in Mandatory Palestine, was created through the armistice agreements between Israel and Egypt in 1949. From that time until 1967, the Strip was under Egyptian control, cut off from Israel as well as from the West Bank, which was under Jordanian rule. In 1967, the West Bank and the Gaza Strip were occupied by Israel.

The 1993 Oslo Accords define Gaza and the West Bank as a single territorial unit within which freedom of movement would be permitted. However, since the early 1990s, Israel has gradually closed off and isolated the Strip, culminating in a full closure it has enforced since 2007, as part of which it severely restricts movement between the two parts of the occupied Palestinian territory, Gaza and the West Bank, as well as from Gaza to Israel and abroad.

A new and updated map published by Gisha in January 2020 emphasizes the spatial dimensions of Israel’s ongoing control over Gaza, and the means by which Israel denies movement of people and goods. The map includes data and background on the crossing points with Israel and Egypt, the “fishing zone” enforced by Israel in Gaza’s territorial waters, and the “buffer zone” it imposes along the barrier separating Gaza from Israel.

To view the map in detail, click on the image above or here.

If you would like to receive a printed copy of the map (42*60 cm), write to Gisha at info@gisha.org. Please consider making a donation to Gisha with your order.