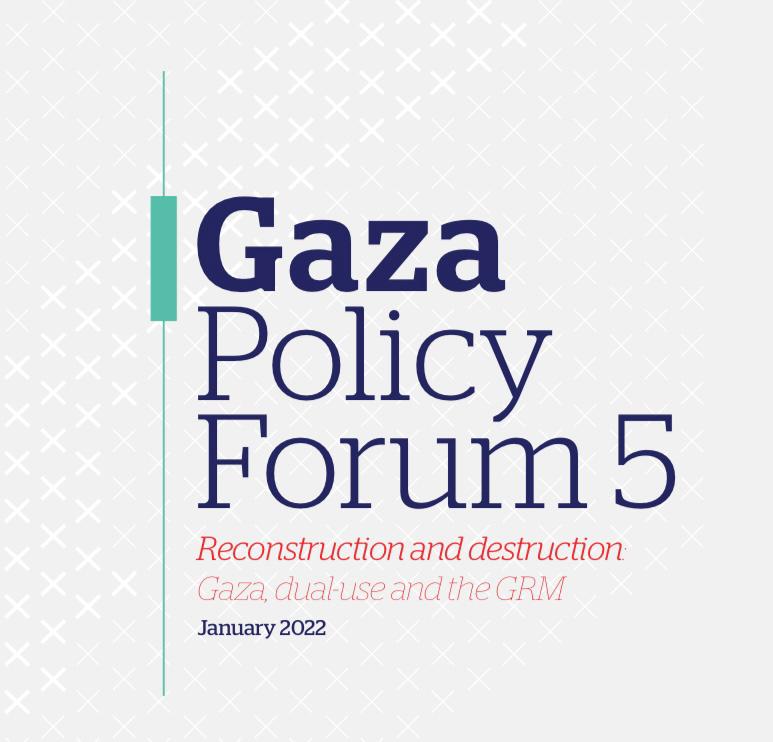 In October 2021, Gisha convened its fifth Gaza Policy Forum, gathering around fifty Israeli, Palestinian and foreign stakeholders virtually to discuss Israel’s dual-use policy for Gaza, including the Gaza Reconstruction Mechanism (GRM). Speakers included a senior official from an international organization, a user of the GRM in Gaza, and a representative from a civil society organization in Gaza. Participants noted that it was the first time such a broad range of stakeholders impacted by the dual-use policy had been convened. This report distills the analysis and policy recommendations made at the forum by both speakers and participants at the forum, reflecting a range of perspectives, which we hope can serve policy-makers in their work.

In May 2021, heavy bombardments by the Israeli military, during an 11-day war, caused widespread destruction and damage to Gaza’s homes, businesses, hospitals, schools, roads and other civilian infrastructure, estimated at a value of 290 to 380 million USD. More than 60,000 housing units were damaged and more than 2,000 were severely damaged or totally destroyed. The escalation reignited discussions about reconstruction, and underlined the fragility and instability of the status quo. Reconstructing Gaza is never straightforward, given Israel’s restrictions on the entry of goods, as well as a sense of political fatigue among donors in the face of repetitive cycles of violence and destruction, with no political horizon in sight.

Israel heavily restricts the entry of thousands of “dual-use” items – civilian items that may have a military use – to the occupied Palestinian territory (oPt). The list goes far beyond the Wassenaar Arrangement, a voluntary export regime for controlling dual-use goods, in which 42 countries, including the United States and European Union member states. Gaza faces the most stringent restrictions. People wishing to bring in items considered to be dual-use by Israel must obtain special coordination, either directly vis-a-vis the Israeli authorities, or via the UN’s Gaza Reconstruction Mechanism (GRM). Israel’s dual-use restrictions are a major impediment to reconstruction, but also to broader economic activity.

The majority of items on Israel’s dual-use list, particularly the Gaza-specific section, are vital for civilian needs, such as construction, civilian infrastructure, as well as industry and the health sector. Examples include cement mixers, cranes, metal pipes needed for water infrastructure, plant fertilizers, and X-ray machines. In practise, certain items do not enter at all. UNCTAD found that relaxing the dual-use list would allow GDP to expand by 11 percent in Gaza by 2025. Many attendees from Gaza in the forum, including those working in the private sector and on infrastructure projects, emphasized the acute distress caused by dual-use restrictions.

The session sought to address how to improve access for dual-use items for civilian needs. In order to encourage a candid dialogue, the session was held under Chatham House rules, so participants’ contributions are outlined without attribution. In some cases, the recommendations have been edited for clarity.

To read the summary of recommendations made by participants of the forum, see here.